We knew that Mayor Bill de Blasio has had somewhat of a rocky relationship with the police unions in recent months—apparently not adamantly defending the Eric Garner grand jury decision was like stabbing the NYPD in the back?—but things took an even uglier turn Friday. De Blasio's comments on the Garner decision and recent efforts to reform and retrain the NYPD has led one prominent police union to ask members to sign a pledge requesting that neither de Blasio nor Council Speaker Melissa Mark-Viverito attend their funeral if they're killed in the line of duty.

You can see the full form, which was placed on the website of the Patrolmen’s Benevolent Association under "miscellaneous," below. [PDF] 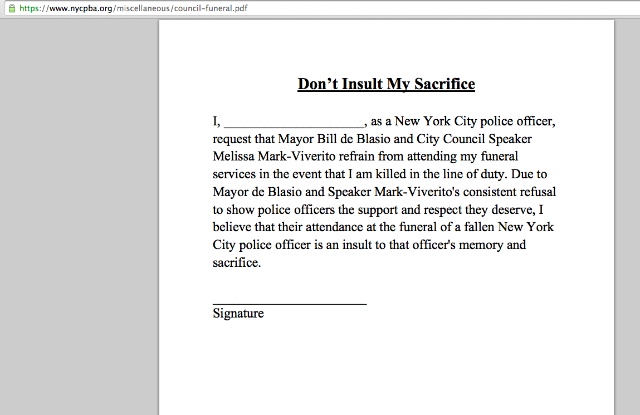 Last week, PBA president Pat Lynch said that de Blasio didn't give police officers enough respect: "What police officers felt yesterday after that press conference is that they were thrown under the bus,” Lynch said after the Garner grand jury decision, in particular criticizing de Blasio for his comment that he told his teenage son to be careful around cops. "That they were out there doing a difficult job in the middle of the night, protecting the rights of those to protest, protecting our sons and daughters and the mayor was behind microphones like this throwing them under the bus."

De Blasio later responded to that on ABC's This Week: "I have immense respect for the men and women who protect us," he said. "What we’re trying to do is make everyone safer in this equation. We’re trying to protect all of our communities and protect the people who do this important work. To do that, we have to draw the community and police together."

We've contacted the mayor's office for comment. At least we know how Anthony Weiner feels about it:

This PBA petition is pretty rotten.