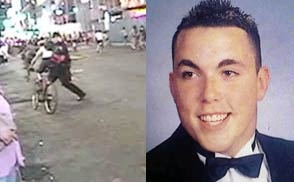 That video depicting a rookie cop bodyslamming a cyclist to the curb in Times Square? Just routine policework, according to the president of the police union.

Instead of slowing down or stopping as any reasonable person would when an officer approached, this rider dropped his shoulder in an attempt to avoid arrest by plowing into the officer's chest, which resulted in the officer pushing him away.

Sort of like that time Amadou Diallo wouldn't stop taking out his wallet and got in the way of all those bullets? Pogan’s been stripped of his badge and gun pending an investigation, but he’s got nothing to worry about – not only is he the son of a respected retired detective, but just look at this photo of the High School football star the Post dug up! Boys will be boys.

Still, Pogan pere better be calling in all his favors, because Mayor Bloomberg does not see eye-to-eye with the police union on this one. Yesterday he described the video as "totally over the top. Inappropriate is a nice way to phrase it. Let's let the police commissioner conduct his investigation." Commissioner Ray Kelly is baffled by the incident. "I have no explanation. I can't explain why it happened." Sources in the NYPD tell the Daily News that the charges against Long will likely be dropped and Pogan will “almost surely be fired.” And for the cop-bike-bodyslam completeist, Smoking Gun has the police report.

#assault
#bike
#brutality
#critical mass
#cyclist
#knocked
#new york
#nyc
#police
#rider
#time's up
Do you know the scoop? Comment below or Send us a Tip