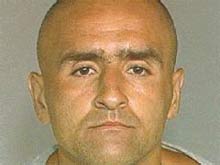 The police are continuing to look for James Gonzalez, who is suspected of fatally stabbing his ex-girlfriend at a grocery store as well as stabbing her co-worker. The attack occurred Friday afternoon at the East Village Key Foods location.

Gonzalez, 42, who had done some part-time work at the Key Foods where he met 24-year-old Tina Negron and dated her on-and-off for a year up until a few months ago, fled the store on foot. He lived at a Bronx rooming house as well as a homeless shelter on Third Street and Bowery in Manhattan, even sleeping in the basement of the Key Foods at time. The police canvassed the shelter but Gonzalez is still at large.

Rosheda Andradas was stabbed multiple times, but is at Bellvue in serious condition. Negron was pronounced dead two hours after the attack. She lived on the Lower East Side and her family told the Daily News she "worked two jobs to support her deaf mother and 14-year-old sister." Her uncle said, "She wanted a family one day."