Investigators are currently seeking a woman suspected of setting suspicious trash fires in a Midtown hotel on Tuesday.

According to the NYPD, the alleged arsonist "used an open flame to set fire to the inside of a room" at the Staybridge Suites Times Square, located on West 40th Street. "In addition, she set fire to two garbage cans that were located in the hallway of two separate floors" before fleeing the scene. Police released a photo of the suspect, and describe her as between 20 and 30 years old, roughly 5'7" tall, and last seen wearing black pants, a black shirt, and black shoes. 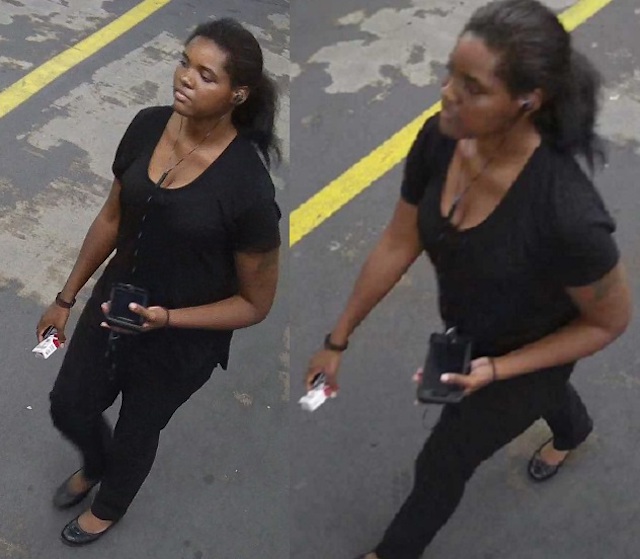 The fires were reported to police around 11:40 a.m. on Tuesday, and while no injuries were reported, the hotel did have to evacuate over 500 people, according to ABC 7. The culprit ignited the blazes on the third, eight, and 18th floors, and although they were reportedly extinguished in short order, occupants on other floors were affected as well.

"From the ninth floor, the smell became stronger," guest Llyod Harrington told ABC 7. "By that time, everybody was in the stairwell on their way down, and we actually met firemen on their way up."

Guest Leigh Jenkins, who was not initially aware that fires had been kindled in a few different parts of the hotel, added that the pervasive nature of smoke in the stairwell—which reportedly remained heavy as she and her son made their way to the ground floor—"caused some panic on the way down."

#arson
#garbage fire
#trash fire
Do you know the scoop? Comment below or Send us a Tip
A new Gothamist is coming! We’ve moved comments over to our beta site. Click here to join the conversation and get a preview of our new website.