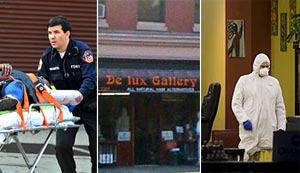 A hair stylist said he played dead as two men shot one person dead and wounded four others yesterday afternoon in Brooklyn. Glen, who works at De Lux Gallery hair salon, told the Post, "I thought [one of the shooters] was ... a madman killing people - I was basically waiting for my turn to be shot."

The police believe the injured victims-- one of whom was an off-duty police officer getting her hair done-- "appear to be bystanders." It turns out the shooters had targeted the deceased, 20-year-old Lethania Garcia. Garcia had been standing in front of Cake Man Raven Confectionary a few stores away when an SUV pulled up on Fulton Street and the gunmen jumped out. Garcia ran into the hair salon, where he was shot in the head halfway through the salon.

Chan Lee, the owner of a restaurant across the street, told the Times he thought he heard a dozen shots, “I thought they were playing around. But then I thought, what kind of toy sounds so loud?” Lee also described the gunfire as being "like Vietnam" to the Daily News. Another person told the News he heard 15 shots, "There was a pop and then a series of staccato pops. It sounded like a semiautomatic."

One bystander outside the salon was shot in the leg, while three inside were hit--a hair stylist was shot in the arm and leg, another customer was shot in the leg and the wounded police officer "suffered a bullet wound to her right toe," according to the Daily News. The cop's friend said, "She's kind of traumatized."

Police are trying to determine a motive for the shooting. From the Post: Garcia "had an arrest record for robbery and drugs and had been shot several times before yesterday. He had a suit pending against the city for alleged police brutality."