Police Search For Suspects in Double Cop Shooting;
One Cop is "Clinging to Life"

The police department has launched a citywide dragnet to find suspects who fired at two police officers during a Brooklyn traffic stop early yesterday morning. 23-year-old police officer Russel Timoshenko was shot twice in the head while 26-year-old police officer Herman Yan was shot in the arm and chest. A surveillance video showed that the cops were shot before they had reached the driver and passengers in the car. The Daily News' Michael Daly describes:

Footage from the surveillance camera mounted outside the Little Red Riding Hood preschool shows the green BMW SUV pulling over.

Then the radio car rolls up. Police Officer Herman Yan is the driver and, as in all car stops, he is delayed for the moment it takes to put the car in park and slide from behind the wheel.

Yan is just approaching the driver's side of the BMW when there is a sudden motion at the edge of the camera frame. That is his partner, Police Officer Russel Timoshenko, who has climbed out of the passenger side of the radio car a step ahead of him.

Timoshenko is now falling backward, having been hit twice in the face by gunfire that has suddenly erupted from inside the BMW.

The footage shows the flash of more gunfire directed at Yan. He responds by firing even as he is shot in the chest and left forearm. He is saved from dire injury by his bullet-resistant vest.

Yan and Timoshenko had run the license plates of the BMW and found that the plates were stolen from a Mitsubishi. A former lieutenant with the Arizona Department of Public Safety told the NY Times, "Traffic stops are the most dangerous thing a cop can do, by far. The officer rarely knows the true mindset or the potential criminal activity that the driver and passengers may be engaged in."

The police are looking for three suspects, including Dexter Bostic; according to the Post, Bostic is a "convicted rapist and armed robber from Queens" who "is on an intensely monitored form of parole because of his violent history." Plus, Bostic is a "salesman at the Long Island car dealership from which the BMW X5 was stolen." Not only that, but the police believe they have footage of him stealing the car from the lot. 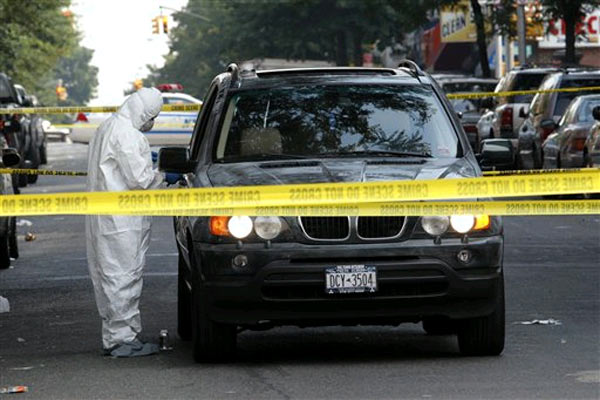 Police found the stolen vehicle a few blocks from the shooting (which occurred at Lefferts and Rogers Avenues in Crown Heights Prospect-Lefferts Gardens). They also found three guns - a .45, 9mm and a Tech-9 automatic - nearby. The guns may have been used in another shooting. The Daily News reports that the police believe "Bostick took a silver Porsche from the lot early Sunday and used it to rob a 25-year-old man of his money, keys and gold chain in Jamaica, Queens, before shooting him in the thigh."

Yan is in stable condition; Police Commissioner Kelly said his bulletproof vest probably saved him. Timoshenko, however, is "dangerously brain-damaged" according to a source. Mayor Bloomberg said he spoke to Timoshenko's parents, "I can give them the thanks of a grateful city, but as a parent I can't come close to understanding their feelings." Timoshenko, a Staten Island resident, had immigrated from Belarus and dropped out of City College, where he was described as a promising student, to become a police officer and has been on the force for about a year. Yan, whose mother is a seamstress originally from Hong Kong, lives in Sheepshead Bay and has been on the force for three years. A friend said that while in ICU, Yan kept asking, "How's Russel? How's Russel? How's he doing."

Update: WNBC reports that a suspect is in custody, though it's unclear who the suspect is. And the NYPD named the men suspecting of shooting at the police officers: Dexter Bostic and Robert Ellis. The reward for information leading to the capture of each man is $32,000 per man.