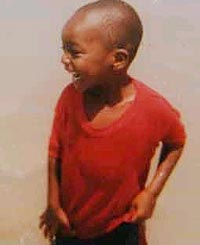 Police are still looking for men who abandoned a BMW in Queens after a fatal crash that left a 5-year-old dead. The accident occurred in the section Jamaica, at 109th Avenue and 164th Place.

The accident was truly horrific. The boy, Jordan McLean, had been in a Ford Escape with his grandmother and aunt, who was driving. The Daily News reports his aunt "swerved" to avoid the BMW, which was apparently drag-racing, but the BMW still hit the car. The little boy was ejected and then, per WABC 7, he was "tossed into a brick wall, where he was then pinned by the spinning car he had been riding in."

What's more, witnesses say the "boy was wearing a seatbelt, but that the impact still threw him from the car. One witness says the boy's pants were pulled down by the seatbelt as he was ejected." He pronounced dead at the hospital; his relatives were not seriously injured.

According to the News, the police suspect the car was bought with a stolen identity. Additionally, a second car, a Jaguar, was seen racing the BMW. Residents complained about drivers racing up and down their street--they showed NY1 damaged fences, a damaged mail box, even a house damaged in an accident. While residents have asked for a traffic light, but the Department of Transportation says even though there have been seven accidents since 2003, it doesn't meet the federal standards for a light.

#car accident
#drag racing
#fatality
#jamaica
#queens
Do you know the scoop? Comment below or Send us a Tip