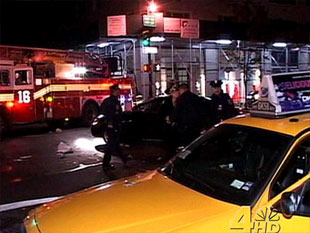 The police are still looking for the driver who drove a Nissan Altima into 44-year-old taxi driver Mohamed Elwaleed yesterday. Elwaleed was pinned under the car and died, and the driver and his female passenger fled the intersection at Madison Avenue and East 65th Street on the Upper East Side.

A witness who was walking his dog at the time told the Post that the cab and Nissan got into an accident near Central Park, "They cut each other off, then they back out of the park and started chasing each other." More from the Post:

El Waleed stopped his car perpendicular to traffic and left the cab waving his hands, trying to get the other driver to halt and exchange insurance information, cops said.

But the other driver panicked because he didn't have the proper paperwork, police sources said.

The nervous Nissan driver repeatedly tried to get around the cab and flee, but each time he swerved his vehicle to escape, El Waleed jumped in front of it, sources said.

The Nissan wound up running over the cabby, pinning him under the car.

The couple ran from the Nissan, but the police were able to catch the woman. And they traced the car to Marvin Loyola, who lives in Harlem; Loyola said that his cousin was the last person driving the car and he didn't know where he was. Another interesting twist: The woman in the Nissan was the driver's girlfriend, but the Post also reported "the driver had gone home to his wife and then fled." And the cops believe he left the city via the Port Authority.

Now the New York State Federation of Taxi Drivers is offering a $3,000 reward for information leading about the driver. Elwaleed, a Sudanese immigrant, leaves behind a wife, a 7-year-old son and an 18-month old son. Seven-year-old son Khalid told the Daily News his father was supposed to come to his school's Thanksgiving celebration today and wife Mayada said, "I love him, I miss him, I can't believe this happened!"

Update: WNBC reports that the suspect was found in King of Prussia, Pennsylvania. He is now in custody, being interviewed by detectives, but there was a brief standoff with the police.