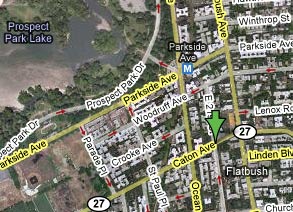 On Friday night, three young women were shot while sitting on a stoop in Flatbush on Friday night. Witnesses say that the gunman was riding a bicycle: He got off when opened fire around 10PM, aiming at two men. He missed the men, but ended up hitting the three women. Then he got on his bike again, heading towards Flatbush Avenue.

The three friends were sitting outside 91 East 21st Street, near Caton Avenue. Police did not believe the women were the target. The victims, ages 17, 18 and 19, were shot in the chest, but all are at Kings County Hospital in stable condition.

The 17-year-old victim's mother Jazmin King said the teens, who recently graduated high school, were "in the wrong place at the wrong time." Rozanne Blucher, the mother of the 18-year-old victim, said, "My daughter didn't even know she was hit. She just felt the heat and looked down and saw the blood." She added, "I want them to catch him, lock him up and throw away the key."

No arrests have been made yet.