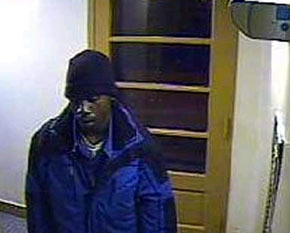 Police are looking for a man who tried to rape a woman entering her Sullivan Street apartment on Sunday morning. According to WABC 7, after the woman "opened the door to her apartment...the suspect forced his way in, pushed her onto the bed and began to choke her."

He allegedly said he would rape her, but a neighbor who heard her cries rushed in and the suspect escaped. The suspect's image was captured on a surveillance camera (there is also video) and the police are accepting tips at Crimestoppers--(800) 577-TIPS.

The number of rapes in the 1st Precinct has "tripled this year compared with the same period in 2007," which translates to 6 this year, versus 2 last year. The Post adds that this attack as well as one at Fulton and William Streets (a Pace University student was molested; she saw her attacker later and told security guards), were not included.

#1st precinct
#attempted rape
#crime
#nypd
#soho
#Sullivan Street
Do you know the scoop? Comment below or Send us a Tip