Yesterday, the Florida Highway Patrol released photographs of Tiger Woods' damaged SUV, which had crashed into a fire hydrant and tree outside his Windermere home. And the crash wasn't just a simple crash down his driveway—the Post says, "Tiger Woods turned a ritzy gated community into a one-vehicle demolition derby as he fled his home as if he were being chased by an angry woman wielding a golf wedge," referring to the rumors that he and wife Elin Nordegren were arguing about his alleged dalliances. 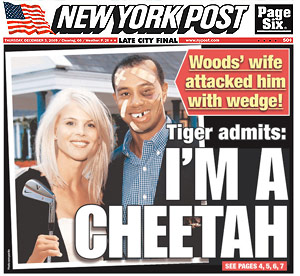 You can read the accident report here, but as you can see from the diagram, he backed out of his driveway, hitting some bushes in a median, and then crashed three times on the road and into his neighbor's property, hitting the tree and hydrant. (You also see images of the SUV here.) Woods was ticketed for careless driving (he already paid the $164 fine), but the Post adds, "The disaster's price tag includes $8,000 damage to the Caddy, $3,000 to repair the hydrant, and $200 for a tree and sod in front of his neighbor's house. Tiger will also have to pay $100 to fix up some busted hedges."

In the meantime, with Woods admitting to unspecified "transgressions" and letting his family down, it seems the floodgates have opened. Golfer Jesper Parvenik, who introduced Nordegren to Woods, told the Golf Channel, "I really feel sorry for Elin since me and my wife were at fault for hooking her up with him. We probably thought he was a better guy than he is. I would probably need to apologize to her... It's a private thing of course. But when you are the guy he is, the world's best athlete, you should think more before you do stuff ... and maybe not 'Just do it,' like Nike says." BURN.

The couple who have two young children are reportedly in "intense marriage counseling" —the Chicago Sun-Times' Bill Zwecker says that their pre-nup is being rewritten, "At this point, the couple needed to remain married for 10 years in order for Woods' wife to collect a splitsville settlement of $20 million. I'm being told that time frame has been shortened — and the dollar amount increased 'substantially.'"

Later today, there's a press conference scheduled by attorney Gloria Allred, who is representing Rachel Uchitel, one woman linked to Woods. Though Uchitel denied having an affair with the golfer (on the front cover of the Post, no less), Radar Online reports that Uchitel will admit to a relationship.