After two women's bodies were discovered duct-taped together on the Upper West Side yesterday, the NYPD has shared sketches of the women in hopes that someone can help identify them.

A person in Riverside Park called the NYPD after seeing two figures near the Hudson River around 2:40 p.m. on Wednesday. Police found the women, unconscious and unresponsive, on the rocks. Both women were clothed and had no visible signs of trauma, according to authorities. The bodies were also bound together with duct tape.

The medical examiner's office is determining cause of death, and the NYPD has released images and descriptions of the women: 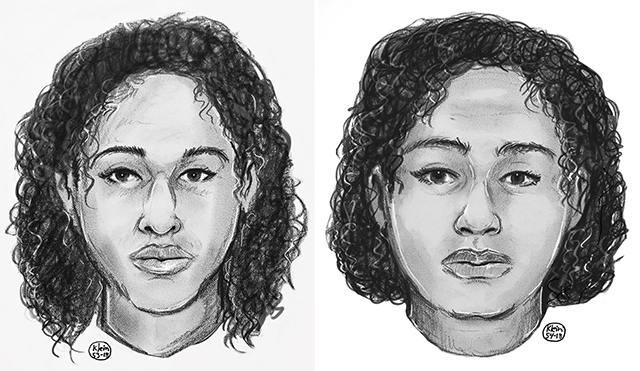 Sketches of the women released by the NYPD

a police source as saying, "It appears to be a suicide pact," and that they were bound at the waist. The source also said that the pair had died recently. A Post police source claimed the bodies "were badly decomposed."

UPDATE 3:20 p.m.: The medical examiner is still determining the cause of death for both women, but the ME released a statement this afternoon contradicting the Post's source: "The Office of Chief Medical Examiner generally does not comment on the state of decedents, however reports that the decedents in this case were 'decomposed' upon discovery are false."

Anyone with information in regards to this incident is asked to call the NYPD's Crime Stoppers Hotline at 1-800-577-TIPS (8477) or for Spanish, 1-888-57-PISTA (74782). The public can also submit their tips by logging onto the CrimeStoppers website, on Twitter @NYPDTips or by texting their tips to 274637 (CRIMES) then entering TIP577.