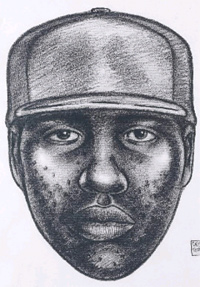 Police are hoping for tips from the public as they released a sketch of the man suspected of raping a woman in her Prince Street apartment building on early Tuesday morning.

The suspect allegedly followed the victim from the subway and asked her for a cigarette; when she went into her building, he followed her upstairs, dragging her into the courtyard and assaulted her. The suspect is described as a black male in his 20s, about 5'8" and 200 pounds, with a pockmarked face. He also used a box cutter or razor to threaten the victim.

Soho residents were hopeful the police would make an arrest. One woman told WNBC, “I hope they find the person...you never want anyone to be attacked or feel vulnerable or feel like they can’t be in the city alone at night.” And a person whose parents live in the same building told WCBS 2, "[The victim is] a young pretty girl from the neighborhood, just a nice person. That brutal rape and they passed my mom's door to get to that basement area. It's scary."

While crime statistics show that rapes are up more than 100% versus the same period last year (7--including this rape--vs. 3 in 2007), Police Commissioner Ray Kelly said, "The numbers are very small. We don't see it as a trend. It used to be a business community and now it is a residential community."