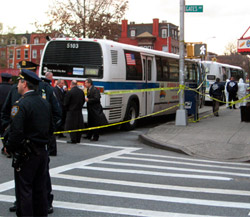 A man is being questioned in connection to the murder of a B46 bus driver yesterday afternoon in Bedford-Stuyvesant. The driver, Edwin Thomas, was fatally stabbed by a passenger over an argument about a transfer. 1010 WINS reports, "A tip led police to the [28-year-old] man, an alleged drug dealer, who was taken into custody at a friend's house in East New York." He is being questioned at the 81st Precinct.

Witnesses say that Thomas allowed the suspect onto the bus, even though the suspect "swip[ed] his invalid Metrocard several times in vain," according to the Daily News. Then the suspect harassed Thomas, a NYC Transit bus driver for the past seven years, for a transfer. From the Daily News:

"You didn't even pay. Why should I give you a transfer?" Thomas tried to reason with the passenger.

Enraged, the suspect punched the 5-foot-6 Thomas in the head, witnesses said. Thomas pulled over at Malcolm X Blvd. and Gates Ave. and the attacker jumped off the bus, but then forced his way back on before the doors fully closed.

A 66-year-old passenger who regularly rode Thomas' bus said the killer then pulled a knife and plunged it into the driver's chest.

Two people tried to chase the suspect, but lost him after a few blocks. The NY Times says that while many buses have surveillance cameras, Thomas's bus did not, "but detectives said they would remove the bus’s doors and examine them and areas around the driver’s seat for fingerprints."

The last time a bus driver was killed was in 1981. Mayor Bloomberg said, "Edwin Thomas was a good man who was good at his job of helping move New York City. An attack like this is so shocking because it has become so rare in our city." Thomas leaves behind two children; his 18-year-old son Jeffrey Jupiter told the Post that his father "loved his job. He never missed a day's work... My dad died for $2."

The NYPD, MTA, and Transport Workers Union each offered $12,000 rewards, for a total of $36,000 for information leading to the arrest and conviction of Thomas's murderer. MTA CEO and Executive Director Elliot Sander said, "Our men and women are dealing with the public everyday. I think this is a situation that we can only describe at this point as random. I'm not sure that anything more could have been done."