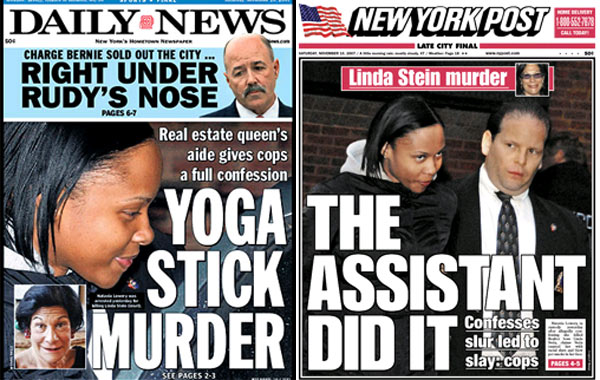 Yesterday, the police arrested the personal assistant to "broker to the stars" Linda Stein in connection with Stein's October 30 murder. Stein, who had also managed the Ramones and later parlayed her connections to sell real estate to celebrities, had been found bludgeoned to death in her Fifth Avenue apartment by her daughter. The police revealed that assistant Natavia Lowery confessed to them that Stein's abuse pushed her over the edge.

Police Commissioner Ray Kelly said, "Lowery, who had been Stein’s personal assistant for approximately four months, claimed that Stein had been verbally abusive to her," and the Daily News has the most comprehensive account of what police believe happened leading up to Stein's death:

Stein, 62, who was battling cancer, started blowing pot smoke in her face and berating her as she worked on the computer, Lowery told cops.

"Get the f---ing e-mails! How can you be so f---ing slow!" Stein supposedly bellowed, a police source said.

Stein, who had private yoga sessions in her $2.5 million pad, was waving a 4-pound strength-building yoga stick at Lowery as she yelled, the assistant told cops.

After Lowery retrieved the e-mails, Stein offered to buy her lunch as a peace offering.

"I've got my own money. I don't need you to buy me lunch," the assistant said indignantly.

"Black people don't have any money," Stein retorted, according to Lowery. "Save your money and I'll buy you lunch."

That's when Lowery allegedly grabbed the yoga stick and beat Stein six of seven times on the back of the head. Lowery's mother, however, yelled as her daughter was taken from the 7th Precinct in the Lower East Side, "She's innocent! My baby is innocent...Don't say a word. God is with you, baby."

The murder weapon, which might also be a Pilates bar, still hasn't been found. Police say that Lowery cleaned herself up in Stein's apartment (the police earlier had taken parts of Stein's bathtub drain in hopes of finding evidence) and stole Stein's cell phone and ATM card, withdrawing $800. According the Post, the police, who had interviewed 60-70 people, got their "big break" when Lowery called detectives to "complain about the reporters who had staked out her Williamsburg apartment building."

[Detective Kevin] Walla and his partner on the case, Detective Antonio Rivera, met her at the Kellogg's Diner on Metropolitan Avenue in Brooklyn, where it became clear that Lowery was ripe for a confession. They took her back the station house on the Lower East Side.

"It evolved into something totally different, because we took her out of her atmosphere and brought her into our atmosphere," Walla said.

Stein's previous assistant had been fired, either because he didn't respond to Stein's romantic advances or because they were arguing over a commission. Stein apparently found Lowery, who worked at PR firm Rogers & Cowan between 2001 and 2002, through a temp agency. Lowery's friends and family call her a nice girl, but other disagree, pointing to alleged incidents of theft and identity theft.

Friends and family have noted Stein's brash, tough-talking attitude. Steven Gaines, a friend of Stein's and an author of a book about exclusive NYC real estate, told the NY Times, “I bet you Linda had been bickering, fighting and saying nasty things to this girl all along. Linda was very, very bad on her underlings. She was really, really bad...Linda talked out of the side of her mouth and opened up a really big, loud, dirty mouth."