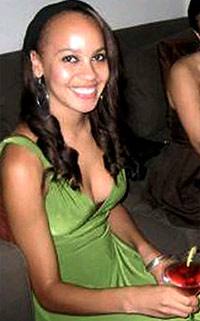 Police are handling the death of a young woman, found in her mother's apartment at NYU-owned 4 Washington Square Village, as a possible homicide. The woman, Boitumelo McCallum, last seen either on Wednesday night or Thursday morning, was found on Sunday, after subletters smelled a foul odor coming from the locked room and called the super.

The Daily News reports that the police discovered McCallum's decomposed body "wrapped tightly in a bedsheet and wedged between the bed and the wall." A police source said, "It would be difficult to get tangled up in the bedsheets this way. It looked as if the body had been laid down on the sheet, and then rolled up in it." Condom wrappers and empty malt liquor bottles were also found in the bedroom. Cops suspect she died from blunt force trauma; however, the ME's office is conducting further tests.

McCallum's mother, Teboho Moja, a professor at NYU's Steinhardt School specializing in globalization and higher education, was overseas, traveling with a foreign study group. McCallum's father Robert, an adjunct professor at NYU who lives in Harlem, had gotten married last Wednesday, and she had thrown a party after the wedding. Attention is on McCallum's 20-year-old boyfriend, who was allegedly upset that he was not invited to the party. The Post adds that the boyfriend was possessive" and that he "stressed out" McCallum. The News' source said, "Everyone is calling, asking for information about this young woman - except her boyfriend. The sense is that he's not calling because he knows what happened."

Police were searching the grounds and trash compactor room of 4 Washington Square Village (part of the complex between West 3rd and Bleecker, LaGuardia and Mercer) for evidence. David Lee, a neighbor on the 8th floor, told the Times, "It’s crazy, it’s shocking, it’s an absolute anomaly." Another resident, Latoya Jackson, said to WABC 7, "It's very hard to believe that there's so many persons walking around and no one missed her until a couple of days later. I'm so sorry to hear about it and my heart really goes out to the family."

McCallum was a sophomore at Mills College in Oakland, attended the Beacon School for high school and participated in the American Museum of Natural History's after-school program.