In July 1991, the body of a little girl was found stuffed in a cooler in upper Manhattan. Now police appear to be closer to solving the murder of the little girl known as "Baby Hope." 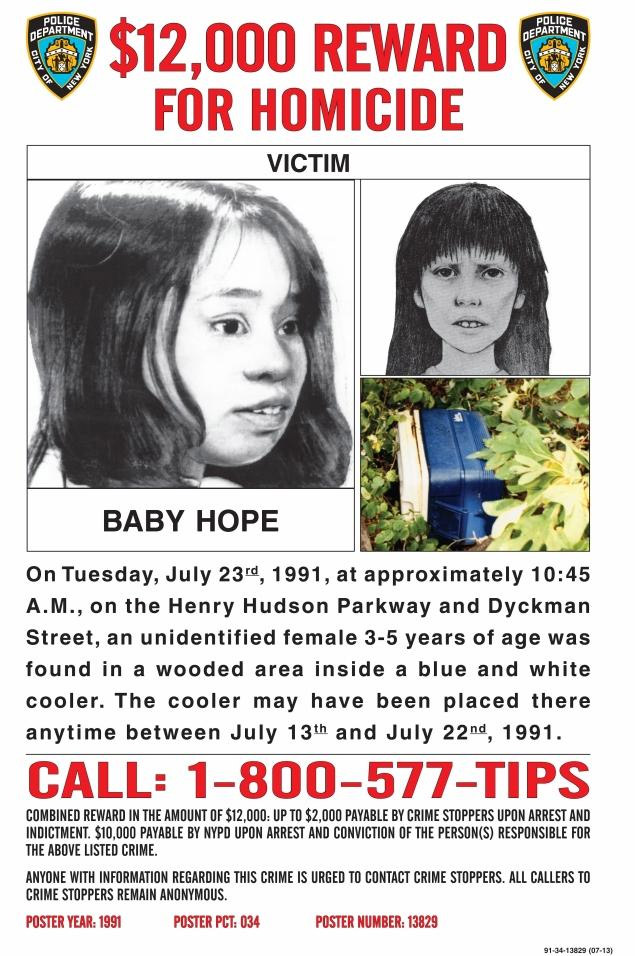 Earlier this summer, the NYPD renewed the effort to try to solve the decades-old cold case. They put up fliers, offering a $12,000 for information related to the case, noting that the cooler had been left in a wooded area in at Dyckman Street and the Henry Hudson Parkway. The child's body was malnourished and apparently sexually abused. Now DNAinfo reports:

Sources say detectives have located Baby Hope’s mother in Washington Heights and have confirmed her biological link to the slain 4-year-old girl through a DNA match.

The NYPD has now turned its focus on finding Baby Hope’s father who, sources say, ran off with the little girl and her older sister just months before Baby Hope’s body was found on July 23, 1991, according to the mother’s account.

The man, whose name is being withheld, is being sought as a person of interest in the girl’s death.

The NYPD got a tip from a woman who claimed, according to the NY Times, that "she had spoken to a woman who said she had a sister who had been killed, the law enforcement official said. The woman who provided the tip said she had seen the recent news coverage about the case and suggested it was possible that this woman was Baby Hope’s sister."

NBC New York's sources say that "the mother claims she lived in fear of the baby's father and always suspected he had something to do with the girl's disappearance. She was afraid to go to police, she told detectives." The police have reportedly confirmed the mother's identity through "scientific evidence."

Retired police detective Jerry Giorgio, 79, who worked on the case, told the Daily News, "[It] really stands out for me. First, it's a child and to know that she had been starved and abused for most of her life. It's horrible. She was only 28 pounds."

#baby hope
#baby hope murder
#cold case
#Washington Heights
Do you know the scoop? Comment below or Send us a Tip