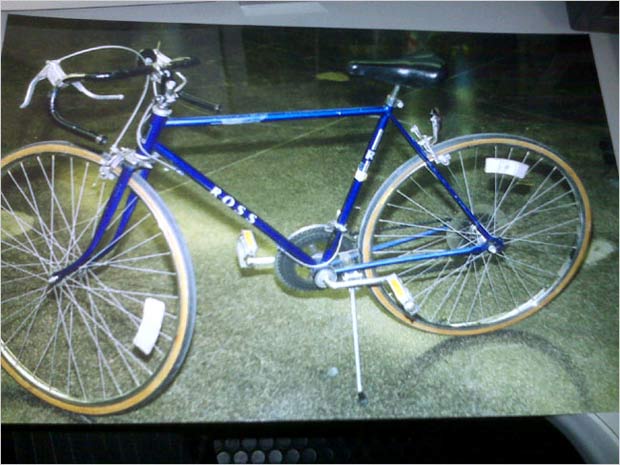 In hopes of more leads, the NYPD has re-released the photograph of the bike they believe belongs to the person who bombed the Times Square army recruiting center on March 6. The police also revealed more details about the circa 1980s bike. From the Daily News:

"Someone might have sold this recently at a garage sale in the fall, when they were cleaning up," NYPD Lt. Dennis Briordy said of the 10-speed Ross bike.

"The bike is in relatively good shape," he said. "For that reason we don't think it spent the last 20, 30 years being banged around the City of New York."

The bike, which was found in a dumpster a few blocks away, has handlebars are wrapped in electric tape and a sticker from the "Yonkers Cycle Center," a closed store whose old employees don't remember anything about it.

The police believe the Times Square bombing is connected to the 2005 bombing outside the British Consulate and last year's Mexican Consulate bombing. A bicyclist was seen near those bombings, but the bike was a mountain bike. A former NYPD bomb squad detective tells the Times, "When you have an individual bomb-builder like that, they are usually someone who keeps to themselves. They don’t share a great social life, and they tend to be introverts."

There is a $15,000 reward for information leading to the bomber's conviction (call Crimestoppers at 800-577-TIPS). The News' Michael Daly even writes a letter to the bomber, asking why.

#bicycle
#bomb
#Clue
#nypd
#recruiting center
#Times Square bombing
Do you know the scoop? Comment below or Send us a Tip