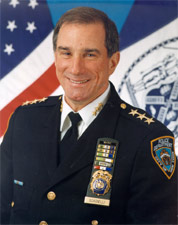 NYPD Transportation Chief Michael Scagnelli likes to bring a little nature into his city office, in the form of big stuffed game he's hunted around the world. The Daily News reports on his collection of animal trophies, and police commissioner Raymond Kelly's order to remove them from headquarters.

"Going to his office was like going to the Museum of Natural History. And it wasn't just his private office, it was in the outer office, too, where everyone else had their desks. There was a gigantic bird on someone's desk," the source said. "He had one - a cougar or a leopard or something, its claws out, catching a gazelle. He shot both but it was designed to look like the cougar killed the elk."

So the bison, birds, elk, leopard, gazelle and deer all had to take a hike, and Scagnelli had to pay movers to haul them away. Some cops criticize the order saying it's an example of Kelly's micromanaging, and defending Scagnelli's ability to stay focused on the clock -- saying he's done his job in getting traffic deaths down. While some in the office found the displays offensive and over the top, he has gained a lot of admiration overall -- slaying animals aside. On an NYPD message board addressing this topic, he is pointed out as being "one of the good Chiefs."

As for the animals, he's kept some antlers and monkey skulls in his personal office, saying they are permissible because they aren't stuffed. It was also reported that "a meeting room has an 8-foot plastic replica of a hammerhead shark the chief caught - complete with real shark teeth." Maybe Scagnelli should have participated in Union Hall's taxidermy event!