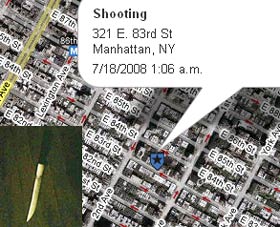 While responding to a woman's call for help in a dispute with her boyfriend, a police officer ultimately fatally shot the man who refused to drop a large knife.

The incident occurred at an apartment building on East 83rd Street on the Upper East Side. A woman had flagged down a patrol car; according to police, the woman said "she and her boyfriend had been drinking, but he had become abusive." The police went to the apartment and found the boyfriend who would not drop the weapon and instead allegedly lunged at them.

The boyfriend was shot in the chest and was pronounced dead at New York-Presbyterian Hospital/Weill Cornell Medical Center. This was an on-duty police shooting; there have been a number of off-duty law enforcement officers shooting people threatening them with weapons this past week.

Update: The AP has some more details. A cab driver actually flagged down the cops--the girlfriend had just been punched by the boyfriend after they had gone to a bar. The cops and girlfriend went back to the apartment for her to get some of her belongings.

[Spencer] Parris at first refused to open the door. Moments later, police said, he burst out wearing a T-shirt and boxer shorts, holding a 13-inch knife over his head and yelling, "I'm going to kill you."

One of the officers pulled the girlfriend into a stairwell while the other drew his gun and ordered Parris to drop the knife, police said. The man kept advancing, backing the officer into the end of a narrow hallway, police said.

Parris came within about three feet of the officer when he fired a single shot into the victim's chest.

Additionally, the girlfriend did tell police Parris "suffered from bipolar disorder and had previously threatened suicide." The NYPD considers this a justified shooting.

#domestic dispute
#knife wielding man
#police shooting
#shooting
#upper east side
Do you know the scoop? Comment below or Send us a Tip
A new Gothamist is coming! We’ve moved comments over to our beta site. Click here to join the conversation and get a preview of our new website.