Police Dig in Search of Killer's Other Victim 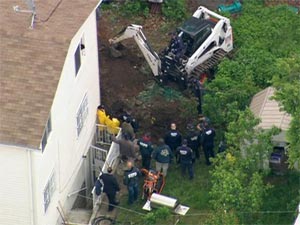 A yard in Jamaica, Queens was excavated by police after a convicted murderer said he dumped another body there. Gregory Wynder, who is serving a life sentence for the 2001 murder of a Harlem woman, has claimed he killed two other women--claims that Queens detectives believe are true--in a South Jamaica home where a girlfriend lived.

A "handcuffed and shackled" Wynder showed detectives where on the 170th Street (near 105th Avenue) lot he supposedly buried the body of Jackie Torres, a homeless woman with whom he ran a shoplifting scheme. However, the police did not find a body yesterday and do not plan to continue digging, though they did take away bags of evidence.

Celeste Smith, the daughter of Wynder's girlfriend at 170th Street, remembered when he lived with them and told the Daily News her son used to say, "I swear to God he killed somebody in the house." She added she saw Wynder mopping up blood, but that he claimed it was Kool-Aid.

#crime
#excavation
#Gregory Wynder
#jamaica
#murder
#queens
Do you know the scoop? Comment below or Send us a Tip
A new Gothamist is coming! We’ve moved comments over to our beta site. Click here to join the conversation and get a preview of our new website.