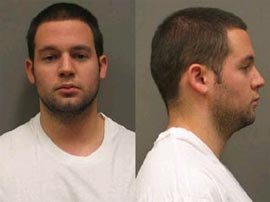 Police are looking for witnesses who may have seen the silver Infiniti SUV "any time after early Wednesday morning," because that's the vehicle a missing Brooklyn woman was last seen in. Laura Garza left the Manhattan nightclub Marquee early Wednesday morning with Michael Mele (pictured), a convicted sex offender, and hasn't been heard from since. State police investigated Mele's upstate apartment, finding a woman's shoe near a dumpster and a large piece of his home's carpet missing.

Mele is currently being held on a probation violation not related to Garza's disappearance. The State Police said Mele “has a history of being sexually aggressive toward women and confronting women in secluded areas to perform lewd acts" (he was convicted of forcible touching). Investigators, who drained the pond and septic tank at his apartment complex, believe that Garza was killed, after finding blood in the Infiniti. The State Police added, "Mele frequents locations in and around New York City and the tristate area, and it is believed that some of the women he has approached have not come forward to police at this time."

Garza's roommate was worried when she didn't meet up to see the Rockefeller Christmas Tree lighting last Wednesday night. However, her family is remaining hopeful through their worry. Her brother told the Post, "We have lots of faith that she will be found."