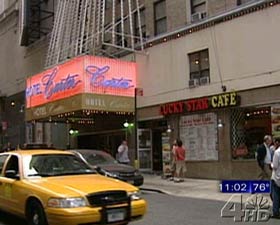 Clarence Dean, a registered sex offender in Florida and Alabama, was charged in the murder of a young woman whose body was found at a Times Square hotel. While cleaning a room on Thursday, a housekeeper at the Hotel Carter, on West 43rd Street near 8th Avenue, noticed some plastic bags under a bed and realized there was a body inside. Dean had checked out of the room on Wednesday.

Dean reportedly told the police he said "he was being scapegoated for the killing because of his past arrests for sex crimes." But the police believe that the victim, a woman in her 20s who was about 130 pounds and 5'11", was a call girl who Dean met via an online dating service. And when reporters saw him being taken from a Midtown precinct, the Post reports that Dean mumbled, "I was protecting myself."

The Hotel Carter is popular with tourists, due to its very modest (around $100/night) rates. However, TripAdvisor reviews of the hotel range from "this hotel should be closed down" to "Sleep on the street before going here."

#crime
#dating
#florida
#midtown
#murder
#plastic bags
#police
#rape
#reviews
#sex
#The Hotel
#The Police
#Times Square
#Wednesday
Do you know the scoop? Comment below or Send us a Tip