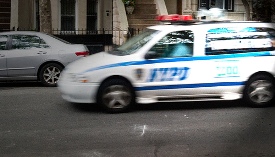 The police have increased their presence in Crown Heights after two incidents that have upset the black and Jewish communities and caused unrest between them. And many are recalling the summer of 1991, when the Crown Heights riots shook the city.

Last month, a 20-year-old black man, Andrew Charles, the son of a police officer, was attacked by a group of white men believed to be part of the Hasidic anti-crime patrol, Crown Heights Shmira. Brooklyn DA Charles Hynes said, "You can’t have a group, whether it’s the Bloods, Crips or Shmira, acting like vigilantes," which angered Jews.

Then last Friday, a 14-year-old Jewish teen Alon Sherman was beaten and robbed of his wallet, cell phone, watch and bike, seeming by a group of black teens in retaliation of Charles' attack. That has led to hundreds of Hasidic Jews protesting the Sherman's attack and Hynes' characterization of them.

Some black and Jewish Crown Heights residents told the Sun they think "officials are overreacting" with their rallies that attempt to ease racial tensions and, today, a 14-year-old was arrested for Sherman's beating. He will be charged as an adult.