Shanahan is allegedly "suspect 2", at the far right

The NYPD announced that it arrested another protester who allegedly attacked police officers during the December 14th Millions March across the Brooklyn Bridge. Jarrod Shanahan, 29, was charged with two counts of assault on a police officer, plus resisting arrest, obstruction of governmental administration and riot.

Police shared photographs of seven protesters who appeared to assault police officers or tried to stop them who were trying to arrest CUNY professor and poet Eric Linsker. Linsker allegedly threw a garbage can at police. Here's video of the confrontation: 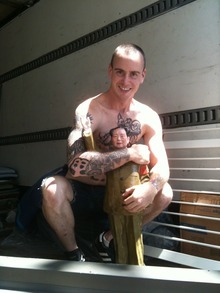 The Post notes that Shanahan had written for Vice about the 2013 death of Kimani Gray, who was killed by police (cops say the 16-year-old aimed a gun at them), and also about the time "I Punched My Boss In The Face". Plus: "On his since-deleted Twitter account, Shanahan... referred to cops as 'racist dogs of the rich' in a tweet tied to the police killing of Michael Brown in Ferguson, Mo." Shanahan also wrote a story for Gothamist about the dearth of public public restrooms in the city.

In a profile on Brooklyn Brainery, Shanahan describes himself as "a writer, educator, and activist living and working in the New York area. Jarrod studied Philosophy at The New School and does not regret getting a worthless degree from a corporate, faux leftist university, because it gave him the opportunity to read a ton and meet one or two OK people."

Four other protesters wanted in connection with the Brooklyn Bridge incident have been arrested.