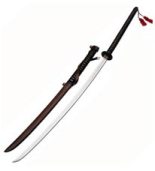 The police arrested the boyfriend of a woman found murdered in a Soho apartment. The victim, Denise Deperrie, was found by her roommate on Wednesday and police immediately suspected Juan Rios, her boyfriend who had slashed her with a samurai sword in July.

The Daily News reports that Rios had checked himself into a hospital yesterday, saying, "I did a bad thing." Deperrie and Rios met at a methadone clinic. According to Newsday, Rios attacked Deperrie with a samurai sword, slashing her legs and face, on July 30 when she told him to get an AIDS test; he also fractured her nose.

Rios had been in jail after the attack, but was released in August because Deperrie did not testify against him in time. Deperrie's mother believes her daughter was afraid. Ann Connor told Newsday she "begged her daughter to come hide out on Long Island" but Deperrie said, "Ma, I'm afraid he's going to come out to you." The Manhattan DA's office said, "If we can just get [victims] to come in, we can connect them to witness-aid services and social workers."

Residents in the Crosby Street apartment building say that they noticed a stench; police believe Deperrie was killed late last week. Her roommate Ronnie Laietta noticed the smell, but ended up cleaning the apartment in an attempt to freshen the apartment. When the smell persisted, Laietta, who is not a suspect, went into Deperrie's room and found her body. Police say that Deperrie was stabbed over 20 times.