A man accused of taking an upskirt photograph of a woman leaving a Harlem subway station is now wanted for unlawful surveillance.

The incident occurred on August 10th, around 9:50 p.m. According to the NYPD, a 34-year-old woman had exited an A train at 145th Street and Saint Nicholas Avenue and was walking up the stairs "when the male approached her from behind, lifted her dress and utilized his cellphone take a photo of her before fleeing on foot to parts unknown."

The woman was not physically injured during the incident. Police released images of the suspect, described as last seen wearing a red T-shirt, black jeans and black baseball cap worn backwards while carrying a black backpack. 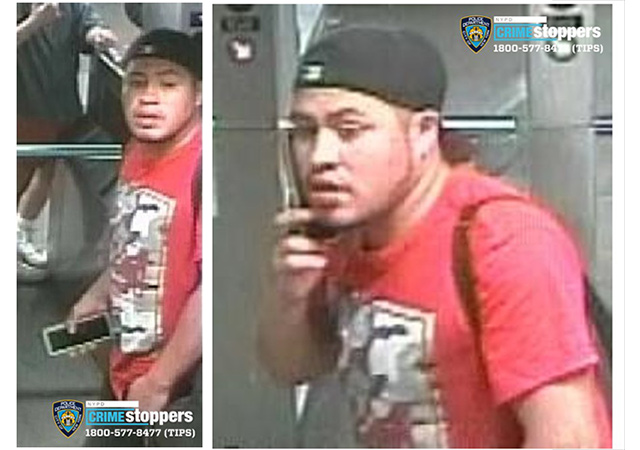 Images of the suspect from NYPD

Anyone with information in regard to the identity of this male is asked to call the NYPD's Crime Stoppers Hotline at 1-800-577-TIPS (8477) or for Spanish, 1-888-57-PISTA (74782). The public can also submit their tips by logging onto the CrimeStoppers website at WWW.NYPDCRIMESTOPPERS.COM, on Twitter @NYPDTips.

If you see or experience sexual misconduct in the subway (this includes seeing a masturbator, being groped, being grinded on, etc.), you can report it to the MTA and police on this website. There's also a place for you to upload photos and/or video.

#harlem
#subway
#unlawful surveillance
#upskirt pervert
Do you know the scoop? Comment below or Send us a Tip