Trigger Warning: An unseasonable blast of cold air reminiscent of last winter's infamous Polar Vortex is headed our way next week. Tropical Storm Neoguri, off the coast of Japan, has initiated a chain reaction in weather patterns which, according to Weather Underground, will cause a ripple effect in the jet stream over western North America, resulting in a phenomenon "similar to the nasty 'Polar Vortex' pattern that set up during the winter of 2014." Guess we're still not done slurping up winter's blood from that snowman's skull. Fine, pass it over.

A cold air mass above the Gulf of Alaska will leak south and east early next week, and temperatures in the midwest could dip down into the 40s by Wednesday. This is, obviously, not normal for July—record low temperatures are anticipated for the Plains states and Great Lakes region. On the east coast, we'll be lightly caressed by the edge of the Don't Call It A Polar Vortex, and meteorologists expect temperatures to be about ten degrees cooler than normal by the time the cool air mass drifts our way. Oh no when will it end oh wait this is awesome.

Again, the National Weather Service cautions that this is technically NOT a Polar Vortex, but rather a "high meridional event," and meteorologist Larry Cosgrove rants on his Facebook page that calling it a Polar Vortex is "insane. Poor wording combined with misunderstanding of the term make a mockery out of synoptic meteorology." Whatever, nerd—it's a Polar Vortex! 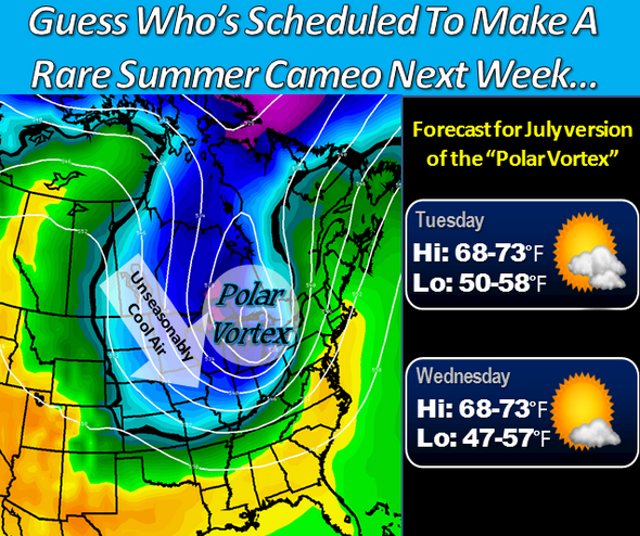 (The National Weather Service field office in Chicago's forecast for the region. (Via Capital Weather Gang)

#polar vortex
#summer
#why god
Do you know the scoop? Comment below or Send us a Tip