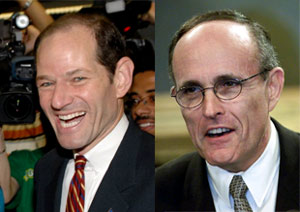 A Harlem Assemblyman is so unhappy with Governor Spitzer that he's laying down what the Post calls Spitzer's "DEBUT DEM DISS." Keith Wright, who is a Democrat, told the Post, "He’s acting like a Democrat Giuliani - it’s either his way or no way. I’m not a big fan. I had a better relationship with [Republican former Gov.] George Pataki.” Ouch! That's a double diss - to bring up Giuliani AND to say Pataki was a better colleague.

It seems that Wright's main beef may be due to the fact that Spitzer removed him as the acting chair of the Harlem Community Development Corporation (apparently Spitzer didn't want a politician doing the job). Wright called the dismissal "a tremendous slap in my face" and complained, "Theoretically, I’m supposed to be a friend. How many days did my father [the late state Supreme Court Justice Keith Wright] and I walk around in the hot sun to promote [Spitzer]?" Ah, politics: Spitzer did run on a platform of bringing reform to state government.

Wright has been upset with Spitzer before: Earlier this year, he, as well as other Democratic Assembly members, were annoyed when the governor's panel to select a new comptroller didn't include any Assembly-backed choices. However, the Assembly had the last word when they appointed Thomas DiNapoli, an assemblyman from Nassau County, to comptroller.