Poison Gas Found at UN Office - "No Hazard to NY" 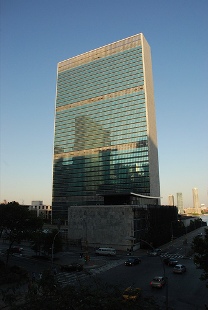 We suppose that if you're a UN inspector who just investigated an Iraqi chemical weapons facility, you might be too tired to store poisonous chemicals properly and might just throw them into storage. Last week, archivists at the United Nations Monitoring, Verification and Inspection Commission discovered phosgene, a hazardous material that was "used during World War I as a choking agent" in files dating back to the 1990s, prompting the FBI and NYPD to head to the UNMOVIC's offices on 48th Street at 1st Avenue.

No toxins were detected in the sixth floor offices and it turns out that the phosgene (suspended in a can of oil) were accidentally sent to administrative officers instead of a chemical laboratory, according to the AP. The most reassuring bit of information, even more so than the UN's proclamation that the city of New York was not in any danger was that the United Nations secured the materials by putting them into two Ziploc bags and then in a room that's double-locked. Ziploc is so awesome!

Some other small amounts of chemicals were also found, and all the offending materials were taken away (secured in a metal box so they can't get out!) by a Hazmat team.

Photograph of the Secretariat building, just a block away from the UNMOVIC offices, by djwerdna on Flickr

#dating
#fbi
#flickr
#get out
#new york
#News: National
#nypd
#photos
#the city
#united nations
#us
#war
#World War
#world war I
Do you know the scoop? Comment below or Send us a Tip