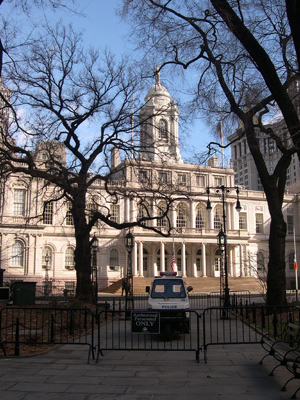 When you're a public employee who threatens a City Councilman with assassination, the logical step would be to A) apologize B) lay low and hope people forget about the incident C) accept a temporary suspension D) sue the city for $1 million. Charles Barron's chief of staff Viola Plummer is going with the latter choice and suing New York City for "severe mental anguish and emotional distress." Mind you, this is for an incident that began when she threatened to have a man killed for voting the wrong way in the City Council. Plummer was then suspended from city employment for six weeks by Quinn, initiating the lawsuit.

Strangely, Viola Plummer is starting to grow on us. Councilman Barron's chief of staff garnered growing public attention when she heckled Council Speaker Christine Quinn during a debate over naming a street after Sonny Carson, a black activist who reveled in disliking anyone who wasn't black. It's a movement kept alive by a handful of people, like Charles Barron and Viola Plummer. Plummer threatened Councilman Leroy Comrie with assassination after he simply abstained from a vote to put Sonny Carson's name back on a street-naming bill that was up for approval.

We'd like to say that the lawsuit is a possible endgame to a fiasco that has Barron unilaterally renaming parks and streets after Sonny Carson, but the episode continues to surprise us. We have to imagine that considerable political pressure will come to bear for and against handing Viola Plummer $1 million of taxpayer cash. A lot of readers seem nostalgic for a grittier NYC. Lawsuit shakedowns and threats of violence seem like classic Tammany Hall-type politics, so soak it up. In a few years, or decades, you'll be able to tell youngsters you were in NYC during "the good old days."