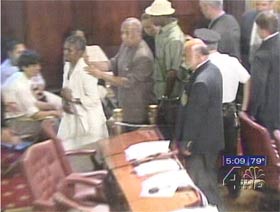 However, Quinn made it clear Plummer would only be allowed to visit City Council meetings as a member of the public. But yesterday Plummer entered the floor of the chambers, instead of the visitor's gallery, and all hell broke loose.

The Sun counted three police officers and four security guards, not to mention Barron rolling up his sleeves to act as a "buffer" between Plummer and security. Some remarks from Plummer, Barron and Quinn:

"This was a selective enforcement of the law so that they can continue the harassment, the retaliation, and the discrimination against not Viola Plummer and Charles Barron, but black people in general," Mr. Barron said. "This is another form of Jim Crow-ism. They want us to sit in the back of the bus, in the balcony, anytime you are an assertive black, and that's the problem in City Hall." Plummer, who appeared visibly shaken by the standoff, said it should make no difference where she sits during a council meeting. What Ms. Quinn "thought she could do, and what she almost did, was to provoke me," Plummer said. "I have a history, I have a history, of dealing with the likes of Christine Quinn."

From the Daily News:
"Viola Plummer is no longer an employee of the New York City Council," Quinn told reporters. "She's not an employee, or a Council member or a government official, and those are the categories of individuals who can be on the floor during a City Council meeting."

Barron held his own press conference and declared: "We are not bowing down to white supremacy because that is what she is acting like, a white supremacist."

Quinn's only response was, "Council member Barron can use whatever language he chooses, but I have an obligation to make sure the business of this institution gets done."

Wow, can you tell that Barron and Quinn are thinking running for city offices in 2009?

Plummer also reportedly compared Quinn to Bull Connor. The Wonkster reports that after the hubbub, City Councilwoman Helen Foster "demanded police check everyone on the floor of the chamber to make sure they were supposed to be there under the council’s rule – an apparent jab to Quinn’s decision," but that there were some City Council members who sided with Quinn. No quotes, though, from Leroy Comrie, the black City Councilman who Plummer had "threatened" (because he didn't participate in a vote).