Earlier this afternoon, a 47-year-old Joker stood up from his seat in the City Council chambers and described a New York City that he has come to disdain—in his estimation, now "the most fascist, prudish city alive." And while the Department of Transportation initially declined our request for a rendering of the proposed "activity zones" that could soon corral costumed characters and desnudas into designated blue-painted boxes roughly the size of a city bus, the press office has since complied.

"These are not tiny little areas that people cannot fit in," said Councilmember Dan Garodnick, who's sponsoring the legislation, on Wednesday. "In no way is anyone trying to tamp down free speech, and nobody's saying that people can't be in the plazas at all. It's just that we're trying to get a little bit of order."

In the DOT's estimation, "a little bit of order" apparently comes in the form of NYPD-blue grids set off by cheery Wallgreens red, and a corridor just wide enough for some healthy competition between Elmo, Elsa, and Lady Liberty—all cast in the shadow of a vigilant NYPD officer's gaze. Please briefly pose for your photo and move along to the Olive Garden or one of the many other Times Square Alliance member establishments.

"What we've always said is Times Square should be unusual," Times Square Alliance president Tim Tompkins said earlier this week, standing on the plaza alongside the Naked Cowboy. "Quirky is fine, but creepy is not." (ONLY INDIVIDUALS OFFICIALLY CERTIFIED AS NON-CREEPY WILL BE PERMITTED IN AUTHORIZED ACTIVITY ZONES. ALL OTHERS PLEASE PROCEED TO DESIGNATED CREEPY ACTIVITY ZONES ON LONG ISLAND THANK YOU PLEASE MOVE ALONG AND HAVE A QUIRKY DAY :) 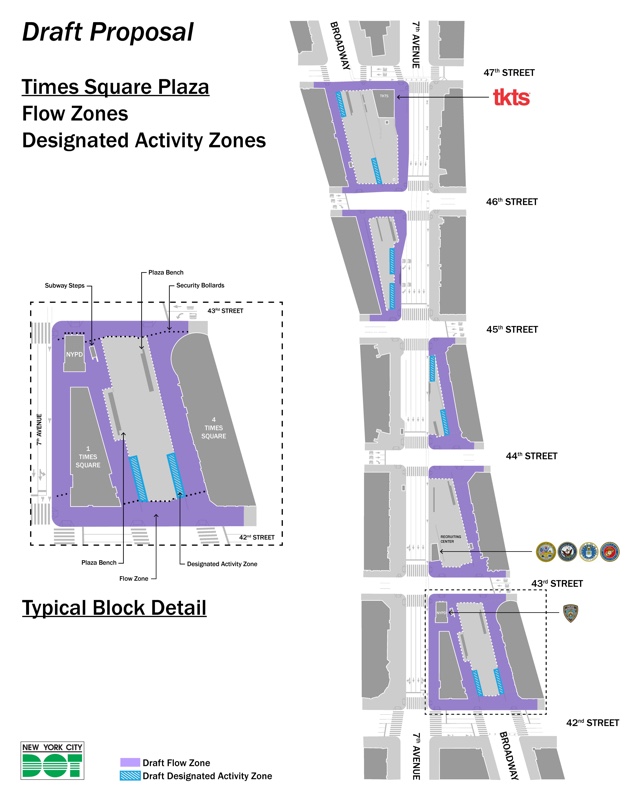 #Activity Areas
#Desnudas
#dot
#renderings
#Times Square
#original
Do you know the scoop? Comment below or Send us a Tip