Please Remember All Your Belongings 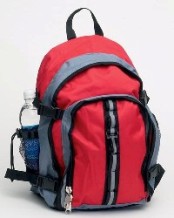 There was a suspicious package in Times Square this afternoon. The NYPD shut down Times Square briefly as they investigated the object at 42nd and 7th Avenue. And the package turned out to be a red backpack forgotten by its Brooklyn owner. D'oh!

The city has heightened its security after the London and Glasgow incidents, and Department of Homeland Security Secretary Michael Chertoff affirms that decision. He told the Chicago Tribune's editorial board, "I believe we are entering a period this summer of increased risk... Summertime seems to be appealing to them... We worry that they are rebuilding their activities."

But he did say, "Our edge is technology and the vigilance of the ordinary citizen." Chertoff hasn't commented on NY politicians' complaints that NYC is receiving less anti-terror funding. Though New York will get more funding than last year, the $134 million is off the $207 million received in 2005. Representative Peter King said, "New York is by far the No. 1 terrorist target in the country, and no one else is even a close second. That's the reality. I'm disappointed and angry."