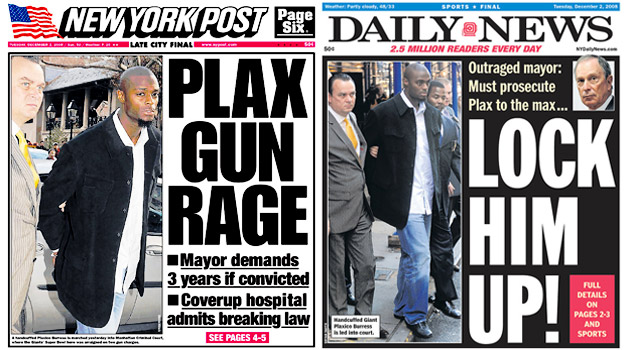 Plaxico Burress is at Giants Stadium to meet with team officials for the first time since he accidentally shot himself in the thigh. And the NYPD is investigating why NewYork-Presbyterian/Weill Cornell, which treated the Giants star, did not report the shooting to the police. According to the NY Times, state law requires hospitals or doctors to contact the authorities "at once."

The NYPD's chief spokesman Paul Browne said that when police arrived on Saturday (90 minutes after Burress checked out), a hospital administrator tried to cite a privacy statute as why the police weren't called, "They initially cited a statute that does not apply in trying to resist releasing information. But they were persuaded otherwise.” (Burress had allegedly first gone to the hospital under an assumed name, but was recognized.) The hospital admitted it was against procedures not to contact the police, and added that the person who failed to do so was suspended.

Mayor Bloomberg sounded off about the hospital's actions as well as on Burress yesterday, "Our children are getting killed with guns in the street. Our police are getting killed. I think it would be an outrage if we didn't prosecute to the fullest extent of the law." The Daily Show also took time to discuss the matter:

(To be fair, the Mumbai terror attacks occurred last week, and the Post and Daily News did feature them on their covers.)

Burress was arraigned yesterday on felony gun charges and released on $100,000 bail. The Post reports that cops are also annoyed that Antonio Pierce, who was with Burress at the time of the shooting (the pair were at the LQ nightclub in midtown), did not meet with them, yet kept up his radio appearance on WFAN. Pierce--as well as Ahmad Bradshaw--are also at Giants Stadium now, according to NJ.com, which writes, "Perhaps the three players, who were all at the Latin Quarter Friday night, are here together to meet with team and league officials. But several other players have been at the stadium this morning, so we can't say for sure."