Plaxico Burress Turns Himself In 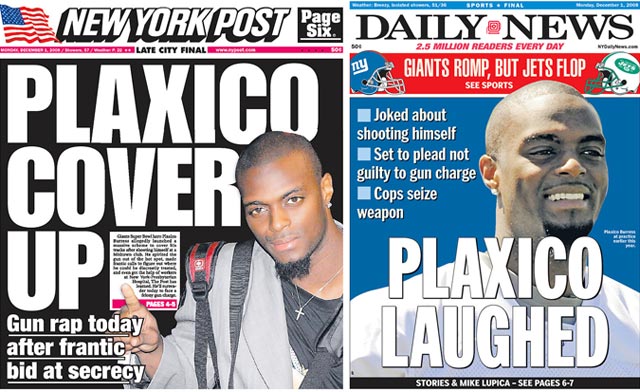 This morning, Giants wide receiver Plaxico Burress turned himself in at the 17th Precinct, two days after, reportedly, accidentally shooting himself in the thigh while at the LQ nightclub in Midtown. The Daily News reports Burress walked "with no sign of a limp from the bullet wound." 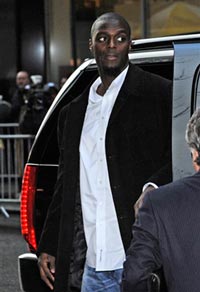 The star athlete is expected to face felony gun charges and will be at his arraignment at 1 p.m. today. His lawyer, Benjamin Brafman, told reporters, "We're entering a plea of not guilty. We're going to let the system do what the system does. We will cooperate to the extent that we can, consistent with his legal rights... Plaxico is a serious professional athlete in a difficult legal situation, and he intends to handle it in a responsible fashion."

The Post, which reports that NYPD detectives took the player's .40-caliber gun from his NJ home last night, details how Burress apparently lied:

*Taking his gun from the Midtown club Latin Quarter, where workers never called authorities and even cleaned up afterward.

* Spending about 90 minutes making frantic calls to figure out where his wound could be discreetly treated.

* Getting special treatment at New York-Cornell Hospital, where he gave his name as Harris Smith, saying he'd been shot at an Applebee's restaurant. Nonetheless, hospital workers recognized him as Plaxico Burress, sources said, and the gunshot was not reported, as required by law.

The Daily News reports that Burress was packing heat because he was afraid his bling might "get him held up... The weapon fired into Burress' leg as he fumbled for it after it fell down his pant leg. The bullet tore through his already injured right thigh."

Fellow player Antonio Pierce was allegedly at the club with Burress, and there's been some talk there was a third player also present (though not involved with the gun). But in spite of the hubbub and injury--that narrowly missed his femoral artery--Burress might be in high spirits: Teammate Brandon Jacobs said, He called me laughing and grinning. He is doing fine. He is feeling good. I called him and made a few jokes about the situation and he laughed - which is what I wanted to hear."

However, Giants co-owner and President Jim Mara is not so amused. He said, "I'm disappointed that this happened, and that any of ourguys would put themselves in this kind of situation. Until we find out exactly what happened we're not going to make any comment or make any decision about what his future is."

#accidental shooting
#giants
#gun
#gun charges
#LG nightclub
#ny giants
#plaxico burress
Do you know the scoop? Comment below or Send us a Tip
A new Gothamist is coming! We’ve moved comments over to our beta site. Click here to join the conversation and get a preview of our new website.