Following a summer of slanderous attacks against Planned Parenthood and repeated attempts by Congressional Republicans to cut its funding, several hundred people turned out in Foley Square today for a #PinkOutNYC rally in support of the organization that serves nearly 50,000 patients in New York City alone. That number might well start going up, given the opening of a new Planned Parenthood center in Long Island City—that is, unless a cut in government funding keeps the organization from providing its essential services.

The latest charge against Planned Parenthood was sparked by a series of highly edited and misleading videos put out by the so-called Center for Medical Progress, a dummy group of anti-choicers masquerading as medical professionals to con their way into conversations with Planned Parenthood executives and clinicians.

Those videos purported to show that Planned Parenthood illegally sells fetal tissue at a high profit margin, and even now, after numerous investigations have turned up absolutely no evidence that the organization is doing anything other than allowing patients to donate fetal tissue for medical research—research that has helped with the development of rabies, polio, and chicken pox vaccines, to name a few—the morbid charge alone has been enough to rekindle a right-wing movement to bring us back to a pre-Roe v. Wade era.

At the #PinkOutNYC rally, many activists and local politicians addressed the crowd, all of speaking out against these attacks on Planned Parenthood, which PPNYC President and CEO Joan Malin said were based on “outrageous and patently false claims.” 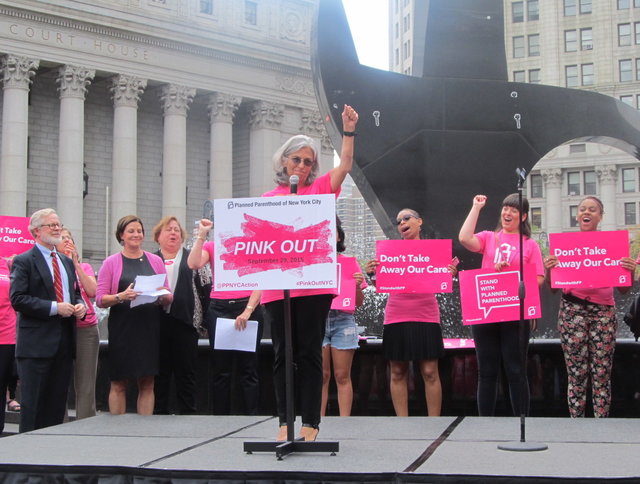 Planned Parenthood provides a range of services in addition to abortion (though downplaying its role as an abortion provider, some have argued, is actually detrimental to the cause). Pap smears, cervical and breast cancer screenings, and routine pelvic exams are among those services that would be affected if the government were to cut funding—which, by the way, does not fund abortion except in cases of rape, incest, or when the mother’s life is in danger. You can thank the Hyde Amendment for that.

In the vein of the #ShoutYourAbortion movement started by Amelia Bonow and Lindy West, activist Diana Danielli, 29, spoke openly about having an abortion last summer, when she learned she was two weeks pregnant while seeing a doctor for a kidney infection.

“I very rarely think about that day, but I have no problem talking about it,” she said. “When I got pregnant, I was not destitute; I wasn’t too young; I was not a victim of abuse. I didn’t struggle with my decision. After going through with it, I felt no regret, no guilt, no shame. No one would make a movie about my story, and yet I’m fairly certain that it resembles the story of countless people in the US who are lucky enough to make this choice and to have access to this care.”

Also in attendance was Chirlane McCray, First Lady of New York City, who condemned Congress for punishing women who have nowhere else to turn for healthcare.

Poet Staceyann Chin recalled her visits to Planned Parenthood when she had first moved to the city without health insurance, describing it as “the kind of place that looks after your vagina.” Upon becoming a mother several years ago, she said, she feared she might become distanced from the pro-choice movement—but carrying her daughter to term actually had the reverse effect.

#planned parenthood
#right to choose
#women's rights
#original
Do you know the scoop? Comment below or Send us a Tip