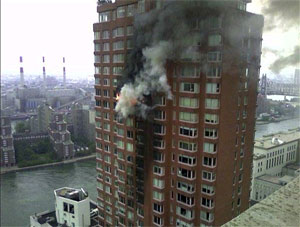 The East 72nd Street building that a single-engine plane crashed into almost a year ago is "almost whole" again. The NY Times visited the Bel Aire at 524 East 72nd Street and found the facade patched up and cleaned, windows replaced and interior hallways with new wallpaper and carpeting. And once the scaffolding is removed, the building's canopy can be replaced.

On October 11 of last year, a Cirrus plane carrying Yankees pitcher Cory Lidle and his flight instructor Tyler Stanger crashed into the building. Lidle and Stanger both died, and t was unclear who was piloting the plane, but the plane seemed to make a difficult turn in very tight airspace. The NTSB eventually ruled that "the pilots' inadequate planning, judgment, and airmanship" caused the crash.

The person most seriously injured from the crash, 30th floor resident Ilana Benhuri, plans on returning to her apartment. She is suing Lidle's and Stanger's widows for unspecified damages.

And in a sign of the NYC real estate market's hardiness, the Times article spoke to real estate broker Donna Olshan who was showing a 47th floor apartment to prospective buyers during the crash. Even though the building was shaking and they had to evacuate, the buyers paid the listing price of $4.3 million for the apartment that day.

Photograph of the building from October 11, 2006 by Dax Gardner/AP