A bill that seeks to reduce the amount of plastic take-out bags clogging the waste stream by charging consumers a 10 cent fee was met with sharp opposition from some members of the City Council, who said it would unduly burden the city's elderly and low-income population.

At a hearing yesterday, council members expressed concern over the long-discussed possibility of charging for plastic bags, a measure that would ostensibly reduce the 9.4 billion such bags that tend to entangle themselves in trees and catch basins, mar the coastline and cause a general headache for the Department of Sanitation, which, despite extensive research, has found no practicable means of recycling them.

Moreover, said Councilman Brad Lander, one of the bill's cosponsors, the 10 cents would not be a tax—businesses would hold on to the fees they collected from the bags. Low-income residents—defined in this case by New Yorkers on SNAP or WIC—would be exempt from the charge. As Councilwoman Margaret Chin, who also cosponsored the bill and whose district in Lower Manhattan was left without power for a week after being bludgeoned by Hurricane Sandy, put it: "It's time for us to start doing real things to reduce waste and reduce our impact on the environment."

Still, the council saw plenty of dissent. Bronx Councilman James Vacca referred to the legislation as "a tax in sheep's clothing," calling it "another attempt of government to tax those who can least pay."

"You are talking, when you add up supermarkets, bodegas, and delis and drugstores, you are talking five to six dollars a week on average," he said, though it's unclear how he arrived at such a figure.

Councilwoman Vanessa Gibson, who also mistakenly referred to the fee as a tax, said she hoped to find a way of discouraging bag use at a lower cost to the community. "I don't know that a tax is necessarily the answer. Are we looking at other ways to encourage recycling? Is there more education that could be coming down?" she asked. "We ultimately have to do something, and I recognize that. The question is, how do we do it in such a way that there's balance in the system?" 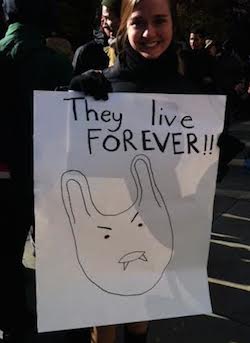 The purpose of the fee is, of course, an attempt to reverse the increasingly dramatic effects of climate change. (An estimated 12 million barrels of oil are used to manufacture the 30 billion disposable plastic bags used in America each year.) But supporters of the bill tout its other benefits as well—the city currently pays roughly $12.5 million in public funds to haul away 100,000 tons of plastic bags each year, Sanitation Commissioner Kathryn Garcia said. Moreover, the bags also disproportionately make their way into the gutters and trees of low-income neighborhoods, where the bulk of the city's waste transfer stations are located.

Representatives from Washington, D.C, which instated its own five cent bag fee in 2009, also showed up to testify. In the time since D.C. passed its version of the law, officials said the city has seen a 60 percent decrease in bags, and 83 percent of residents polled expressed that they either supported, or at least were not bothered by, the legislation. Asked why D.C. had settled on five cents as the fee, a representative explained that the goal was not to gouge shoppers on their bags, but simply to give them an opportunity to reflect on whether the cost was worth it.

Maite Quinn, the business development manager for Sims Municipal Recycling, with whom Sanitation has contracted to process the city's recyclables, also spoke in favor of the fee. She said that in addition to presenting "a range of challenges" at the facility, including clogging recycling machinery and contaminating otherwise recyclable materials, the bags present a particular hardship because there is virtually no market for them.

Despite dedicating millions of dollars to the process of isolating and cleaning used plastic bags, 70 percent go straight to landfills. The resultant product is called MRF film, and it's essentially useless. "We haven't had one consistent customer, and that customer is usually at zero price," she said.

"So when you report it's not a recyclable product, it's not driven by ideology—it's experience?" Councilman Lander asked.

"It's my job to find markets for all of those commodities," Quinn replied. "I've tried really hard to find a commodity for the film."