A protest against the treatment of pizza deliveryman Pablo Villavicencio-Calderon ended with seven people in handcuffs and detained by police after some protesters blocked Fifth Avenue in Bay Ridge.

Villavicencio-Calderon, 35, was detained by U.S. Military Police and handed over to Immigration and Customs Enforcement when he attempted to deliver pizza to the Fort Hamilton Army base on Friday, June 1st, El Diario initially reported. Villavicencio-Calderon was born in Ecuador but lives in Hempstead with his wife, a U.S. citizen, and their two young daughters.

Yesterday evening’s protest began with a rally outside the gates of Fort Hamilton.

“This is the outraged Bay Ridge that understands that immigrants are what make up our community,” said Linda Sarsour, a Bay Ridge resident and the former executive director of the Arab-American Association of New York. “The military police will tell you that they did what is legal and what is necessary. But what is legal is not always what is moral," Sarsour said. "The military police had a choice to make that day, and the choice that they made was to strip a father who is not any danger to any of us in Bay Ridge and to take him away from his family.”

“I’m a Bay Ridge resident, I’m a parent, I have a son in the public school,” said Alan Aja, an associate professor at Brooklyn College. “And when I heard that a local parent who was delivering a box of pizza and has children was picked up by ICE, I said 'I have an obligation to be here.'"

Aja has entered Fort Hamilton himself in the past without incident to watch his child play soccer. “Nobody asked me for an ID, because I'm white,” Aja said. “And I know plenty of people from Bay Ridge who have been through those gates and they have not been racially profiled.”

New York City Council Member Justin Brannan said on Wednesday that Villavicencio-Calderon had presented his municipal IDNYC in order to make deliveries to the base in the past, but on Friday was asked to present more documentation. The city-issued ID was created to give undocumented immigrants a way to navigate city agencies and show proof of identity to the NYPD and other city departments.

In a statement, ICE said that Villavicencio-Calderon "is an illegally present citizen and national of Ecuador."

In March 2010, he was granted voluntary departure by an immigration judge, but failed to depart by July 2010 as ordered. As such, his voluntary departure order became a final order of removal and is an ICE fugitive. On June 1, Villavicencio-Calderon was detained by military police officers and turned over to ICE. He remains in ICE custody pending removal.

On Wednesday, a spokesperson for Fort Hamilton issued a statement to BuzzFeed News asserting that Villavicencio-Calderon had been stopped by Military Police on the base and directed to get a "daily pass" in order to completed his delivery. During that process, the spokesperson said he signed "a waiver permitting a background check, Department of the Army Access Control standard for all visitors, [and] an active Immigration and Customs Enforcement warrant was discovered on file."

But in an interview with Telemundo from the jail in New Jersey where he is now detained, Villavicencio-Calderon said the Fort Hamilton spokesperson is lying about the waiver. "At no time did I sign a document," he told Telemundo. 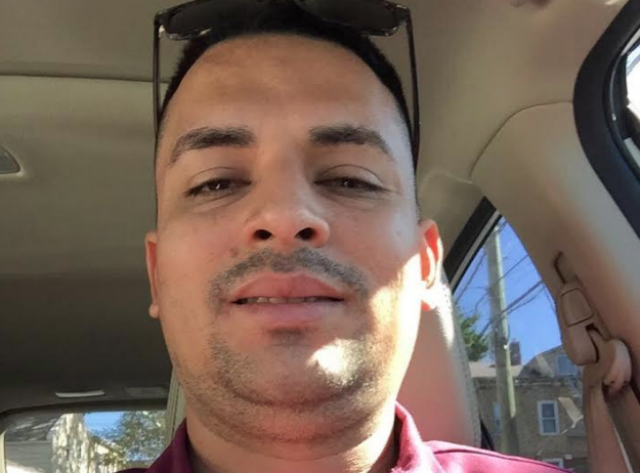 “Every day we find out that there are blind spots in our city where people are not safe,” Menchaca, who chairs the City Council’s Committee on Immigration, told the crowd.

It was an uncomfortable admission of the severe limitations of New York’s self-proclaimed status as a “sanctuary city.” While the City has gone some way towards limiting its cooperation with federal immigration enforcement, the fact remains that once ICE has an undocumented New Yorker in custody, there’s very little local officials can do to protect them from deportation.

One thing New York City can do to help protect its immigrants is to ensure they have access to legal representation, Menchaca said, but City Council’s efforts to guarantee that representation have met opposition from Mayor Bill de Blasio, who has insisted that immigrants convicted of some crimes be ineligible for city-funded representation. Villavicencio-Calderon has no criminal record.

“We are under attack by the mayor of this city,” Menchaca said. “We’re telling him that everyone deserves representation, no matter what. That is the promise of due process.”

After the speeches, the crowd of protesters marched away from the Army base, north up Fifth Avenue.

As they passed the Lock Yard bar, patrons leaned out the window to join in their chant: “No hate! No fear! Immigrants are welcome here!”

At Fifth Avenue and 87th Street, seven of the marchers swerved into the roadway, linking arms and refusing police directions to move. As police handcuffed the protesters and led them away, the remaining crowd chanted from the sidewalk: “You serve ICE! Not the people!”

As the arrests proceeded, a group of bemused off-duty Bay Ridge firefighters looked on from the sidewalk. “You’ve got to protect the country, you know? Someone could be trying to come in here to hurt somebody,” said one, who did not wish to give his name. “Are some good people gonna be caught up in that? Sure. That’s casualties of war. But how do you make it work? There’s no good way.”

Republican congressman Dan Donovan, whose district includes the Fort Hamilton base, condemned the protests, telling WNYC, "Liberal activists are attacking ICE agents and military personnel for following the law in detaining an immigrant reportedly here illegally. The law is the law, and nobody should be telling the brave men and women in uniform not to enforce it."

Villavicencio-Calderon, whose deportation to Ecuador is expected to be imminent, was the primary earner for his family. A GoFundMe campaign has been started in their name.

"The detention of Pablo Villavicencio as he was delivering pizza at Fort Hamilton - under the gaze of Lady Liberty—goes against everything we believe in. Detaining a hardworking man, separating a father from his children and tearing apart communities doesn't make America safe, and a wrong minded immigration policy grounded in bias and cruelty doesn't make America great," Cuomo said in a statement.

"New York stands ready to provide Mr. Villavicencio and his family with free legal representation and services though the Liberty Defense Project, which is the nation's first state-led project to assist immigrants, regardless of status, in obtaining access to legal services. In the face of the federal government's assault on immigrants, we will protect our values and fight for the rights of all New Yorkers."

Several hours after the governor made his statement, the mayor also responded.

We demand Pablo Villavicencio Calderón's immediate release. Delivering a pizza is not a threat to public safety. The ultimate city of immigrants stands ready to provide him and his family with any assistance we can.

#bay ridge
#fort hamilton
#ICE
#immigration
#original
Do you know the scoop? Comment below or Send us a Tip