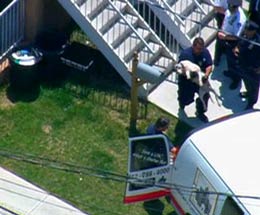 Reports say Pitrowski was attacked on his property. Another neighbor, Reginald Bell, told the Advance he went outside when he heard the elderly man's screaming. Bell said, "The dogs were actually eating him alive. He was mauled completely. His legs were eaten to the bone. His arms were eaten to the bone." After running home to call 911, Bell brought back a butcher knife to scare the dogs off the victim.

The dogs were tranquilized and removed from the house, and WNBC reports the owner is being questioned. According to WABC 7, "The dogs had ran through the back yards to Piotrowski's property. They escaped back home to their owner's house Newark Avenue, where police quickly arrived."

Recently, a bill preventing ex-cons from owning pit bulls, Rottweilers, and other fighting dogs was introduced to the State Legislature and a year and a half ago, City Councilman Peter Vallone proposed a ban on pit bulls.

#animal attack
#dog
#mauling
#pit bull
#staten island
Do you know the scoop? Comment below or Send us a Tip