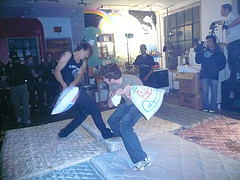 The anonymous arena for this event is like Fight Club for hipsters. We exaggerate (slightly) but were forewarned not to give away too much about the pillow fight’s underground location in Bushwick. Two rows of three mattresses cover the middle of the living room — yes, living room. We would go into more detail about the industrial venue looking suspiciously like someone’s house, but we aren’t allowed.

Mattresses make the ring, an announcer gets the crowds attention -- mic in hand, and the regulation size pillows are held firmly in the contender's hands. There are 16 guys and girls in all, fighting one-on-one until an elimination is made and one moves to the next round. At the end, the “Master of the Mattress” is declared -- and if there's a tie, the audience decides. Fighters have been known to get eliminated at this point based on outfit choice alone, so please wear your most hipsterest of couture if you plan to find a way into the underground pillowfight club. Apparently these kids weren't paying attention when Tyler Durden declared, "You are not your bank account. You are not the clothes you wear. You are not your f*cking khakis."

Photo via eveb's flickr. Posting photos of Punk Rock Pillow Fight online is not a rule.