A tractor trailer crossing the bridge above Pershing Square at 42nd Street has apparently struck the outer wall, causing portions of the bridge to fall onto the sidewalk below. An FDNY spokesman confirmed a "partial bridge collapse" at 42nd and Park Avenue, and said that the truck apparently hit the retaining wall on top of the roadway. "It sounded like a bomb," a tipster who was walking on 41st Street wrote, via email. "I was walking and [the bricks] fell 10 feet behind me, so we took shelter under the overpass. I just remember a guy in a suit took off sprinting at the boom."

The FDNY spokesman said there are no reported injuries as of yet. Here's video of the immediate aftermath of the bricks falling to the ground.

And here's footage of the truck as first responders work to secure the scene. Both videos are courtesy of @matunga4

A view of the truck from above, via Instagram user sarahromani 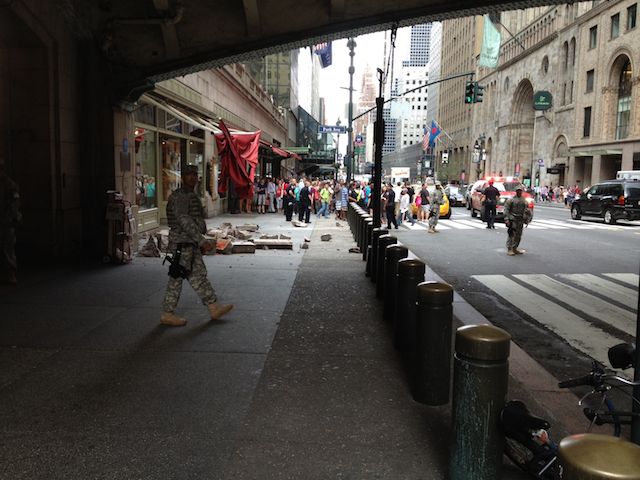 #bricks
#grand central
#truck
Do you know the scoop? Comment below or Send us a Tip
A new Gothamist is coming! We’ve moved comments over to our beta site. Click here to join the conversation and get a preview of our new website.