The Knicks are 5-34. They are the worst. Even Carmelo Anthony is cringing. And last night, some fans sitting near courtside were spotted wearing paper bags on their heads during what turned out to be the team's record-breaking 14th loss in a row.

Upon seeing the fans, even TNT basketball analyst and longtime Knicks adversary Reggie Miller remarked, "Oh, my God. That's not right." Then he checked himself, "Maybe it is." (At the 30-second mark:)

One of the fans, James Martucci of West Nyack, told the Daily News, "We’re doing this because the Knicks are the worst team. It’s not fair what they’re doing. They’re terrible. And Carmelo (Anthony) should be playing. Why isn’t he playing?" ESPN figured out approximately how much the seats cost:

"I'm protesting the [Iman] Shumpert trade," Dylan Samuels added. Samuels didn't want to reveal how much he and his friends paid for the seats, but the tickets were listed at a little over $1,700 on the secondary ticket market.

Possible. RT @benchwarmerdan: Is one of them Dolan? RT guys have the same seats as Knicks owner James Dolan. pic.twitter.com/hmTBhRm8Od

The NY Times noted how ESPN is trying to get out of the predicament of airing Knicks games, "[I]t was left to ESPN on Thursday to impose some punishment, in the polite guise of using its contractual flexibility to show more compelling matchups. Having already carried three Knicks games, ESPN erased three of the four Knicks games left on its schedule. Out went the Jan. 28 game against the Oklahoma City Thunder. Gone is the Feb. 6 matchup with the Nets. The March 25 game against the Los Angeles Clippers was banished from the Bristol empire."

ESPN made its move eight and a half hours before the Knicks played the Houston Rockets on TNT, which probably wasn’t thrilled that the game was still on its schedule. During TNT’s pregame show, the host Ernie Johnson promised that the Knicks would not be discussed — “Thank God!” Charles Barkley shouted — and soon after, Barkley vowed: “I’m not coming to work anymore if we show the Knicks or the Lakers for the rest of the season. I’m putting my foot down.”

Knicks forward Jason Smith said, "I mean, fans are going to do stuff. You can have signs up during the game to support your favorite player. Some people like to do some crazy stuff." 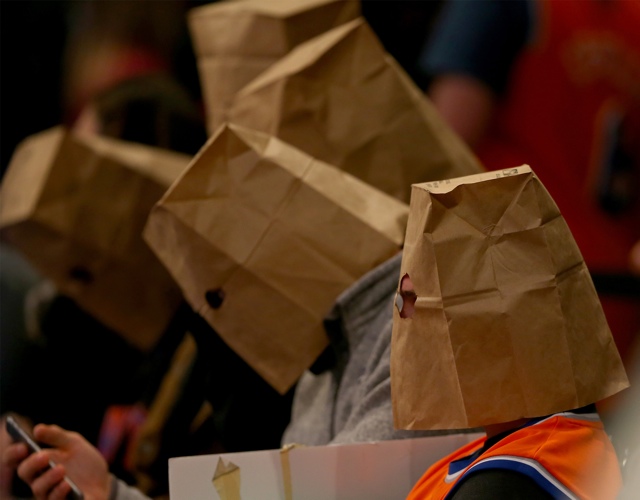 Are we on Deadspin yet? (Getty Images)

Anyway, it's even desperate for Knicks coach Derek Fisher:

#basketball
#carmelo anthony
#knicks
Do you know the scoop? Comment below or Send us a Tip