A Canadian tour bus full of passengers crashed into a row of scaffolding in Midtown earlier this morning.

An FDNY spokeswoman said that the incident happened shortly before 8:15 a.m., when the bus jumped the curb and plowed into the scaffolding outside Hunter College's Voorhees Campus building on Dyer Avenue and West 41st Street. The driver and 43 passengers were removed from the bus, and an unknown number of them were treated at the scene for minor injuries.

An NYPD spokesman did not have any information on the incident, but said that some may be forthcoming. The number on the side of the tour bus failed to connect. The portion of Optimum's Ride's website that discusses the company's safety record is "Under Construction."

The passengers are part of a dance troupe from New Brunswick, and they were in town for a competition scheduled for tomorrow. Before they crashed this morning they were on their way to visit the "Cake Boss'" bakery in Hoboken. "It was pretty terrifying," passenger Lisa Harridy said, adding that this is her first visit to New York City.

Lisa Hovey mother of two girls, Caroline, 12, and Lauren, 15, said it took 20 minutes before they were rescued, and that the driver was integral in helping them to safety. "It was noisy and hot," she said, before adding, "No more buses."

"There was a pothole involved. The vehicle jumped [and] went out of control," the tour bus company's director of operations told DNAinfo. "I'm working with the driver right now to get a complete sense of what happened."

Witnesses said that a bar from the scaffolding pierced the windshield and nearly struck the driver. 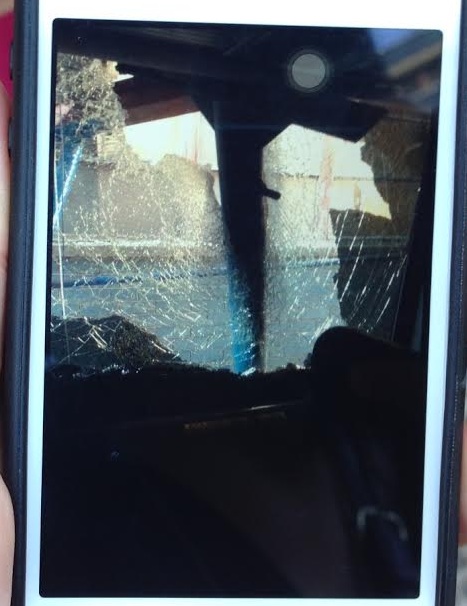 The scaffolding bar, captured on an iPhone (Jen Chung / Gothamist)

On Monday, a tour bus struck two tourists from Spain just five blocks north on 47th Street and 10th Avenue. Both tourists were seriously injured. The bus driver received two summonses, one for failure to yield to a pedestrian and another for failure to exercise due care.

#cis
#hell's kitchen
#midtown
#pedestrian safety
#vision zero
#original
Do you know the scoop? Comment below or Send us a Tip