Today, the city and Times Square Alliance made good on their promise to transform Times Square from a tourist-filled hellscape to a slightly less crowded tourist-filled hellscape with nice places to sit, announcing the "grand opening" of the pedestrian plazas that have been popped up on Broadway since Mayor Bloomberg closed Times Square to car traffic in 2009. Though the plazas were technically completed in 2016, now, crowds are officially invited to spread out over 110,000 square feet of pedestrian space instead of clogging up the street, plus the city announced "new programming," which includes buskers, food venders, public art installations, speaking events and an annual yoga festival. But don't fear, for the controversial costumed characters are still in their Activity Cages.

The plazas, designed by Norway-and-New-York-based firm Snøhetta, double the amount of walking space in Times Square, and though it's still not the chillest part of the city, some pedestrians say they've noticed a marked difference in congestion. At a press conference today, Craig Dykers, an architect and one of Snøhetta's founding partners, said that he took a minimalist approach to the area's design. "It's less about adding things and more about taking them away," he said.

Dykers and his colleagues got rid of phone booths, trash cans, excess street lamps, disconnected crosswalks and other street-cluttering elements, replacing them with concrete floors, a handful of 50-foot-long, smooth granite benches ("They rise above the ground like whales in the Atlantic," said Dykers), and uncluttered sidewalk furniture. They also rewired the area to improve acoustics at large-scale events and installed little silver disks on the ground to reflect the lights from all the neon marquees, plus they added bike lanes, creating, as Dykers described it, a "grand vestibule" for the city. "Our design is not about spectacle. There's enough of that here already," Dykers said.

Here's a blueprint of what Times Square looked like before the redesign: 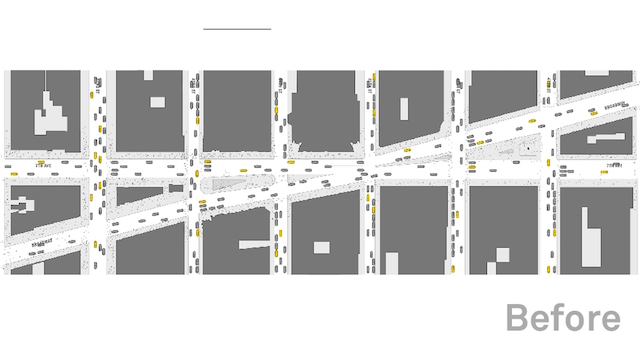 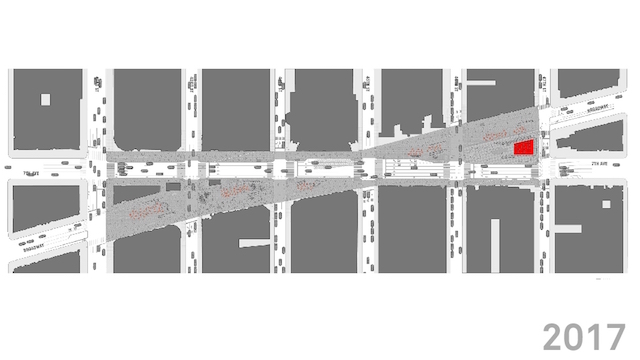 And, of course, here are the aforementioned Designated Activity Zones, which Council Member Garodnick, who represents the area, pointed out "allow Times Square to keep its fun and colorful vibe" while supposedly reducing the number of Spidermen who kick tourists. Doesn't this vibe just scream fun? 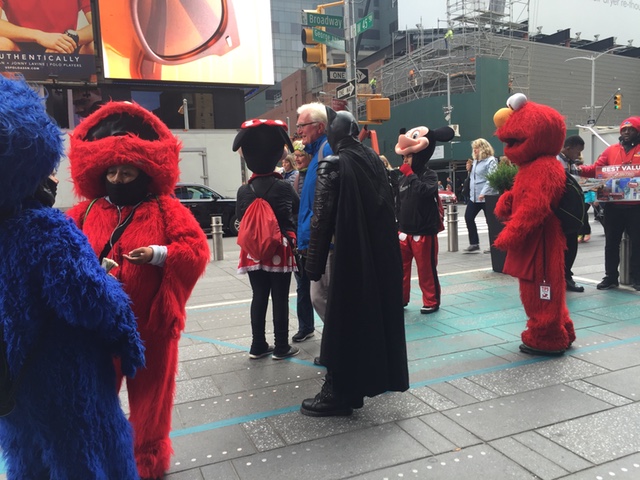 It is noteworthy that though Mayor de Blasio expressed concern about the pedestrian plazas in the past, the city now says that since cars were kicked out of Times Square, pedestrian injuries have dropped 40 percent, there are 15 percent fewer car collisions, and overall crime in the area is down 20 percent, according to NYPD stats. Pollution is also down 60 percent, officials said today.

Which is true, but if the beautification of the area has you feeling nostalgic for the Bad Old Days, don't worry—Times Square's still got it.

#midtown
#pedestrian plaza
#pedestrian plazas
#Times Square
#original
Do you know the scoop? Comment below or Send us a Tip
A new Gothamist is coming! We’ve moved comments over to our beta site. Click here to join the conversation and get a preview of our new website.