Photos: Thousands Rally & Shut Down NYC Streets To Demand 'Feminism For The Masses' Thousands of women and their allies gathered in Washington Square Park late Wednesday afternoon to demand equality and justice for all women, particularly those who are most at risk to the Trump agenda—immigrant women were joined by trans women, queer women, sex workers, nurses, and labor and Black Lives Matter organizers. The rally, which capped off the Day Without A Woman strike, demanded justice for all, regardless of economic status. At one point the crowd closest to the Washington Square Arch chanted, "Feminism for the masses, not just the ruling classes!"

All day, women had been encouraged to abstain from paid work (if feasible), and unpaid work (childcare, wearing makeup, smiling on the street); to avoid spending money; to wear red in solidarity.

Gabrielle Caputo, 22, said she appreciated the "strong anti-capitalist message" of the rally, which coincided with International Women's Day—a century-old protest with its roots in labor organizing. She went to work for part of the day, but left early. Her sympathetic boss joined the rally as well. "It's disruptive in a way that, there could actually be a real deficit [for society]," Caputo added.

Others rejected a major critique of the strike—that it catered to privileged women with flexible jobs and an economic cushion. "We are here with 80 people who are immigrants from South Asia, documented and undocumented people," said Kazi Fouzia, lead organizer for DRUM, which represents low-wage immigrant workers. "Then how is it all upper class people?"

Still, she said a true strike would require more organizing. "For some working class people one day's salary is a lot of money," she said. "So we really need to do a lot of groundwork if we want to do another strike. We need to build a relationship with businesses that will give workers a day off, and pay."

Wednesday's strike was the brainchild of Women's March on Washington organizers, including veteran activists Linda Sarsour, Tamika Mallory, and Carmen Perez. All women of color, they joined as national co-chairs last year in the wake of early criticism. ("The reality is that the women who initially started organizing were almost all white," organizers wrote in a November statement.) 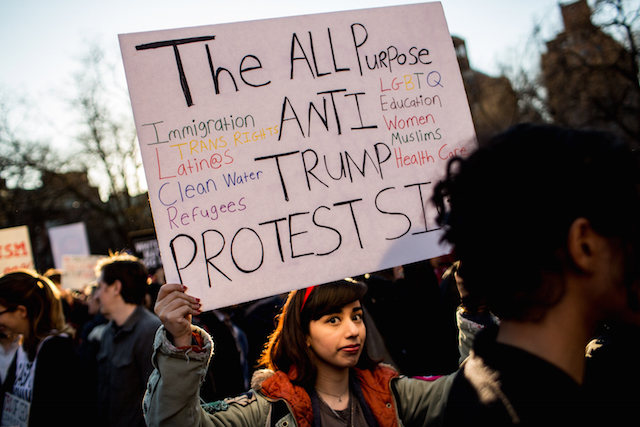 Gabrielle Cuesta, 29, held a handwritten sign on Wednesday that read, "If you are not addressing all oppressions, your feminism is white supremacy." She said she had been hesitant to even come out on Wednesday.

"I went to the Women's March and I had strong feelings when I was there... like it was really strongly representative of cis white women," Cuesta said. "I felt really uncomfortable during the march and did not feel at all like I had much power."

She was swayed after reading the list of Wednesday's speakers, which included a lead organizer of the Yemeni bodega worker strike, mothers whose children had been killed by police, proponents of legalizing sex work, and sanctuary campus organizers. Palestinian flags waved near signs that read "Abortion without apology," and "Socialism or barbarism."

"A lot of people in this movement direct their actions just against Trump, and not against a larger foundation of colonialism and capitalism and exploitation of oppressed people," Cuesta said. "It's important to make sure we're not just fighting for women."

"Look around, right?" said Felix Jean-Louis, 39. One of many men in the crowd, he held his eight-month-old daughter in his arms. "You see a ton of Black Lives Matter signs and Palestinian flags. I'm a guy, and I don't necessarily get to say what feminism is. But my definition is... it leads to the inevitable conclusion that all people need to be equal."

The crowd wound into the street at dusk, stopping traffic as the projected message "Women Strike!" lit up the top of the Washington Square Arch. There were no arrests, according to the NYPD (13 women, including lead strike organizers, were arrested and charged with disorderly conduct earlier in the day, at a sister rally in Columbus Circle.)

"It is right to Rebel, Donald Trump go to hell" in front of NYC City Hall #womensstrike #InternationalWomensDay pic.twitter.com/FFWf9lU0NH

"People need to fund women," said Caputo, one of the protesters. "Grassroots, women-based organizations. Local chapters. We have to put our money where our mouth is. Not just turning up for this and saying, 'Coming out was enough.'"

#A Day without a woman
#rally
#washington square park
#women's strike
#original
Do you know the scoop? Comment below or Send us a Tip