Layers of police barricades and scores of NYPD officers lined 42nd Street, ensuring that the protesters could not block traffic or seriously disrupt the rush hour commute.

Before the event began, a small group of protesters successfully infiltrated the hotel while carrying a banner reading, "NYC Rejects the Party of Hate." They were escorted out of the hotel and arrested; an NYPD spokesperson said ten people were charged with criminal trespass for the hotel action. Another 21 demonstrators were arrested at the protest outside, with charges ranging from blocking pedestrian traffic to criminal trespass and disorderly conduct. 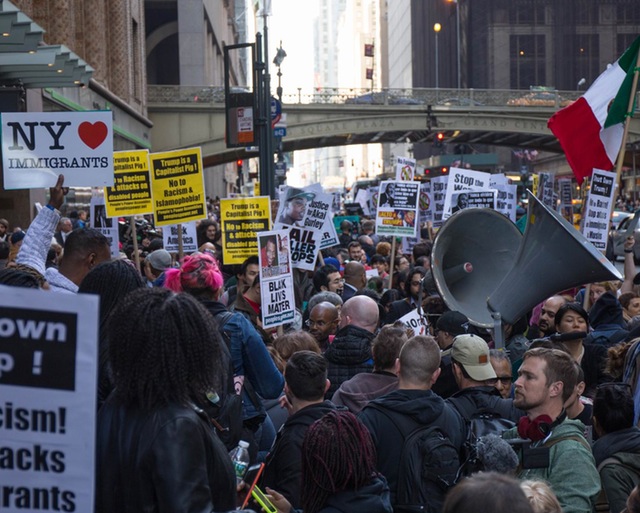 Outside Grand Central Station, Marsha McGowan held a sign that read "Even the Trump Kids Won't Be Voting Got Him." (Turns out they're not registered Republicans.)

"I want the world to know that New York City is not Trump's home turf. He is the slime of New York City," she said.

McGowan, a registered Democrat and the former director of personal health services for the city of Newark, supports Bernie Sanders, but added that she would vote for Hillary Clinton in the general election if she wins the primary.

"I think she's a wonderful candidate and I'll support her if she wins, but I want her to listen to Bernie Sanders. I want her to know that it's not right that a small number of people control so much wealth in this country."

Liz Ellerton, who has spent 30 years of her life in England after growing up in Chicago, was visiting her family in the states and happened to be on 42nd Street when the demonstration began.

"It's kind of embarrassing to be an American over there," she said, noting that Trump's continued success has made it harder for her to assure others that Trump has no chance in November.

"I've got a whole family who thought his chances were low, and I think they still are—ish."

Roughly an hour into the protest, a large contingent from a Fight For $15 rally, which featured Governor Cuomo, marched from 42nd and 7th Avenue to join the crowd outside Grand Central. 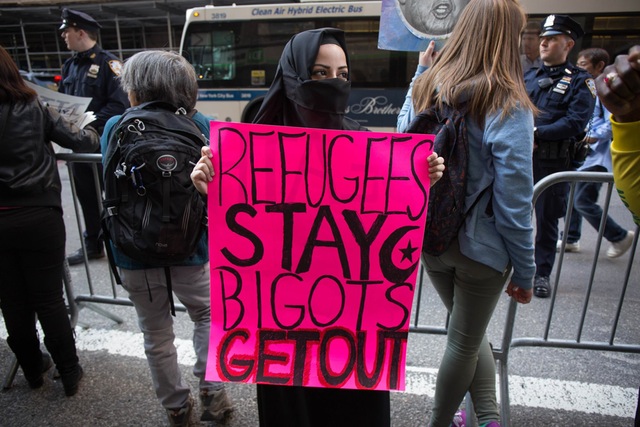 At one point, a man wearing a "Make America Great Again" hat and a sandwich board with pictures of AK-47s on it began fighting with the protesters in the barricades across the street from the Hyatt, punching a protester in the face before the police ejected him and sent him across the street.

The man, who we saw 20 minutes later shouting "Fuck Black Lives Matter" at a woman, was not arrested.

"They shouldn't have let a Trump supporter into an anti-Trump protest, which they did. They didn't do their job," Mike Bento, the victim of the assault, said of the NYPD. "And then they allowed him to continue to assault me, and punch me in the face."

Bento, who was bleeding from the mouth, said, "I feel like it's just an example of exactly the kind of thing that Trump stands for: violence against people of color."

Bento was later arrested, according to protester Barbara Ross, who was also arrested and detained for four hours. "I'd rather spend four hrs in jail then attend a fancy gala with Trump and other hate-mongers," Ross said.

#donald trump
#protests
#original
Do you know the scoop? Comment below or Send us a Tip