Valerie Ross's tears were lit by prayer candles Monday night. She was just one of thousands overcome with emotion as the names of 48 murdered men and women were read from a podium outside of the Stonewall Inn, then shouted by the crowd that had gathered in Greenwich Village to mourn the victims of America's deadliest mass shooting.

Sunday morning's massacre, at a gay nightclub in Orlando, stirred up a familiar pain for Ross. In 2014, her neighbor, Mitchell Pope, was beaten in the head by a stranger wielding a hammer and shouting anti-gay slurs inside their Brooklyn apartment building. Pope fell into depression and later committed suicide. His attacker was never found. Ross sees the tragedy as a link in the chain of anti-LGBTQ violence that reached a new low in Orlando.

Minutes earlier, Carlos Miranda, 31, was resolute on the need for names to be read. "Far too often when people of color die, we’re just a number. We’re just another dead body in the street. No. This is 50 people’s children," he said.

Before the list of those murdered in the Orlando shooting was read aloud, numerous local activists and politicians took to a stage set up on Christopher Street, including Mayor Bill de Blasio, NYPD Commissioner Bill Bratton, Governor Andrew Cuomo, Anti-Violence Project director Shelby Chestnut, and openly gay members of the City Council. Each one's speech was heartfelt and filled with remorse, but none matched the intensity of Cuomo, who delivered a fiery call for strict national gun control.

"The senselessness of it is staggering," Cuomo shouted. "The frustration of a society that would allow a mad man to buy an assault weapon has gone on for too long. How many people have to die before this federal government comes to its senses? When does it stop?"

"Until we have a national policy, none of us our safe," Cuomo continued, standing behind a "We Are Orlando" sign and flanked by American and gay pride flags. He framed gunman Omar Mateen's attack on the Pulse nightclub as a direct attack on the LGBTQ community, calling it "vile," "evil," and "hatred." 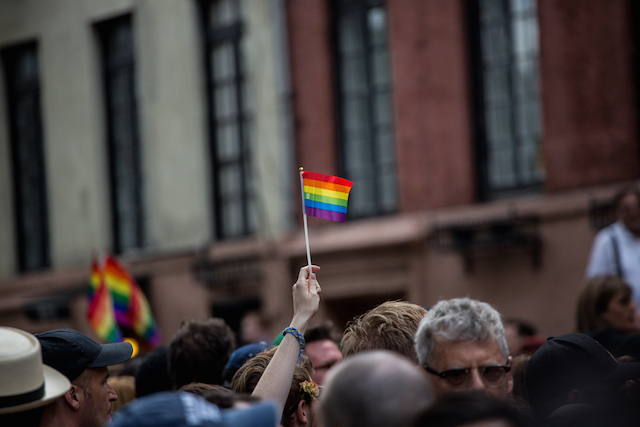 As he took the stage, de Blasio praised the Stonewall Inn as "a place where change is made" before quickly addressing those stoking nationwide Islamophobia in the wake of Sunday's shooting. "We do not accept anyone who would sow division or hatred," de Blasio said. "We do not accept the notion of any of our leaders sowing hatred and division part in the wake of tragedy. And that means you, Donald Trump."

Brooklyn resident Enrique L. Rios, Jr., 25, was shot and killed in the Orlando attack while vacationing, and the Mayor cited a "special grief" for his family's loss. Shane Tomlinson, 33, of Queens was also killed in the massacre.

What do we want? Gun control! When do we want it? Now! #Stonewall #OrlandoUnited pic.twitter.com/F7q0eVXIDj

That attack has made some uneasy about the security of LGBTQ clubs, events, and vigils. Monday night brought a clearly heightened NYPD presence to the West Village, with some officers standing guard with assault rifles amidst a maze of barricades.

Jess Bonfondeo, 25, and Danielle Spadola, 24, were unafraid. "The point [of terrorism] is to be scared, that's why they do these things," Bonfondeo said.

"You can't be afraid, we need to be here and find solidarity," Spadola added.

Tensions rose at the rally when some in the crowd tried to shout down speakers, including Cuomo, de Blasio, and Commissioner Bratton, who were met with a loud backlash and shouts of "Stop police brutality!"

Shaktii Mann was disappointed to see the Governor and Mayor take the podium. "The state is out here to incarcerate and kill more queer and trans people," he said, voicing suspicion of the heightened NYPD presence across the five boroughs. "They're going to surveil undocumented, Muslim, and black queers and put them in cages. The NYPD does not make us safe. Counter-terrorism does not make us safe," Mann said. 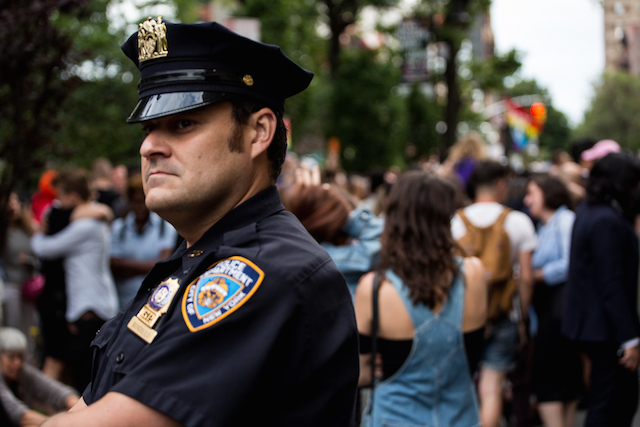 "I lived seven minutes away from there," Gomez said of Pulse. "It should be just tumbled down and made into a memorial place. It should never be reopened ever again...For the majority of my friends that passed away they were just in one side of a bathroom," Gomez said before breaking down in tears.

"I'm in a cloud right now. I feel that I left them behind by themselves, and I couldn't be there with them," he said. Gomez cited ISIS's violent, radical ideology as a possible cause for the bloodshed, but refused to blame Muslims in broad strokes. "It's not Muslims, it's about hatred," he said. "No matter what organization try to calm us down, it's never going to happen. We're going to be together and we love each other very much."

Immediately following the program of speeches, the reading of victims' names began, and hundreds of candles were held aloft under the darkening sky. "Lovers died in each other's arms," Carlos Miranda observed. "We need to say their names."