The tearful widow of Police Officer Wenjian Liu told thousands of mourners yesterday, "To me, he is my soul mate. Wenjian is an incredible husband, son, co-worker and friend-my best friend."

Liu, 32, had immigrated to New York from China as a child, studying at public schools and at the College of Staten Island before becoming a police officer. He had only been married for a few months, and his wife, Pei Xia Chen, clutched a large framed photograph of him. Chen also said, "As the only son, the No. 1 son, he was extremely close [to] and respected his parents, of course. One of his many passions was being a police officer. He took pride in the fact that he was NYPD."

His father said through a translator, "Today is the saddest day in my life." From the NY Times:

He said Officer Liu possessed all the qualities of a good son, taking him to the doctor whenever he fell sick and waiting for him outside the garment factory where he worked.

“He called me every day before he finished work,” he went on. “‘I’m coming home today. You can stop worrying now,’” the officer’s father said.

He said his son’s desire to become a police officer grew after the attacks on Sept. 11th, 2001.

“He bravely served the people of New York,” he said.

“Wenjian, you are the best son.”

Liu and Officer Rafael Ramos, 40, were fatally shot when they were sitting in their squad car in Brooklyn on December 20. They were killed by Ismaaiyl Brinsley, 28, who later killed himself.

Brinsley had written on social media that he wanted to kill police officers to avenge the deaths of Michael Brown in Ferguson, Missouri and Eric Garner on Staten Island at the hands of the police. He was also intensely troubled. Still, Police Commissioner Bill Bratton blamed the "anti-societal" influence of anti-police brutality protesters, and the police unions have faulted Mayor Bill de Blasio for what they say is a lack of support for the NYPD. 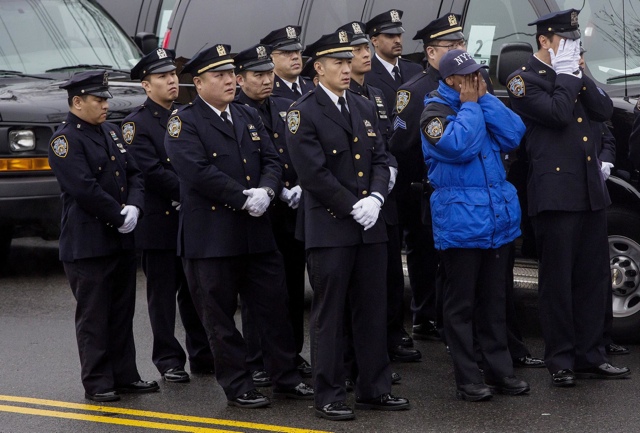 Detective Liu was deeply devoted to his mother and father - a devotion that Confucius said powerfully was, “the root of a man’s character.” In high school, Detective Liu always stopped playing basketball with his friends early so he could go home, he could buy groceries, he could cook dinner for his father and his mother. And his parents - as his parents grew older, he helped in more and more ways. One of his proudest moments was the day he bought a house for his father and mother and began paying the mortgage, so he knew they would be secure in their old age...

The thing about Detective Liu - one of his partners on the force recalled - is that he was always, “more worried about other people than he was about himself.” And he showed this kindness in so many ways, large and small. Detective Liu was the sort of officer who, when he saw someone on the street lost, he’d go over to them, he’d ask if they were hungry - he’d literally buy them dinner at McDonalds and give them a ride home. His partner recalled going out one day with Detective Liu on what our police call a “lift” - a routine visit to help an older person who has fallen and cannot get up. The officers arrived at the old man’s home, lifted him up, put him in a chair, and at that point, their job was officially done. But Detective Liu was not ready to leave. The man he came to help was an army veteran who had served in Vietnam, and he was lonely and he wanted to talk about his life - he wanted to talk about his younger days as a pilot. Detective Liu sensed this so he poured the man a soda, and the officer sat down, and he listened to the man’s war stories, and he looked at his faded photographs. And after a long time listening, Detective Liu knew it still wasn’t time to leave yet.

The officers helped the man to his bedroom and they gently placed him in his bed. And then Detective Liu said to his partner, “Let’s put blankets on him.” And the two young police officers wrapped the old man in blankets. Detective Liu’s partner never forgot that day. He never forgot that what could’ve been a routine, by-the-book lift was transformed into a moment of profound humanity and kindness and decency. His partner said of that visit, “Even though I was the senior one, I learned a lot from him.” That was Detective Liu’s way - lifting people up in every sense, wrapping them in kindness, and teaching others by his example.

Liu and Ramos were posthumously promoted to detective. Bratton said,

In spite of a plea from Police Commissioner Bratton, many police officers—hundreds, by the Times' count—turned their backs to de Blasio during his remarks. Some remained facing the mayor. The Daily News reports, "One high-ranking police source said that he got grief from fellow officers for not turning his back during de Blasio’s eulogy. Asked why he didn’t join, the source replied, 'Cause I was here for Liu and his family - not the mayor. I don't like the mayor or what he stands for, but I agree with Bratton that it's not the place.'" 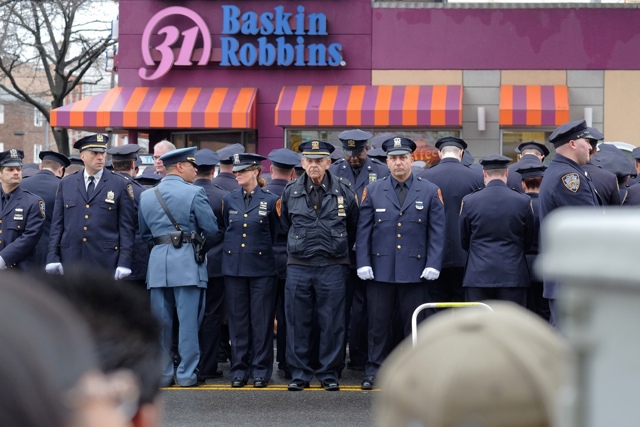 Rep. Peter King (R-Long Island), no friend of de Blasio's, told the Post, "I’ve been critical of the mayor, [but] today is not the day for that [protest]. I understand why the police did what they did [at Ramos’s service]. I think the police have made their point. [But] that should be behind us now. I wouldn’t do it myself."

After paying tribute to Liu's immigrant success story and tragic death, and the other police officer line of duty deaths, Bratton alluded to the police's apparent work slowdown in his eulogy (PDF):

To Wenjian’s and Rafael’s brothers and sisters in blue, I want you to know: I am so proud of you. Proud of you for making those possibilities a reality for so many in this city. Even after forty-four years, I am so proud to be one of you.

We’re cops. We hold the line. We don’t quit when things are hard, because when aren’t they?

We took this job to prevent crime and disorder. Over the past twenty-two years, this Department has reminded the world of how that’s done. The mission has no changed. The belief in possibility has not changed.